The year’s first major is getting a major purse boost 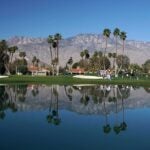 The year's first major will be played at Mission Hills Country Club for the final time in 2022.

LPGA pros competing in golf’s first major of the year will see a significant purse increase in the coming years.

The LPGA Tour announced on Tuesday that the first major of the year — formerly known as the ANA Inspiration — will rebrand as the Chevron Championship as the multinational energy company takes over as title sponsor of the event. As the new title sponsor, Chevron will increase the purse for the event by over 60% to $5 million in 2022.

“We could not be more excited to announce our partnership with Chevron,” said LPGA commissioner Mollie Marcoux Samaan. “Welcoming another leading global company to our portfolio of sponsors that believes in the power of the LPGA to inspire women leaders, to showcase human performance at the highest level and to highlight the importance of diversity and inclusion in all facets of life, is truly game-changing for us.”

But an increased purse is not the only change coming to the year’s first major. The event, which has been hosted at Mission Hills Country Club in Rancho Mirage, Calif. since its inception in 1972, will move to the Houston area in 2023. A new host club will be confirmed in the coming months.

The move away from Mission Hills likely means the end of one of the LPGA Tour’s most historic traditions — the winner’s leap into Poppie’s Pond. The tradition, which started with Amy Alcott’s plunge in 1988, will see its final iteration next spring as the tournament is played for the final time at the Dinah Shore Tournament Course.

“We have all made some lovely memories at Mission Hills over the years which we will enjoy celebrating in 2022,” said major-winner Lydia Ko.

The final element of the new-look major will be a new place on the calendar. Although no official date has been selected, the LPGA did note that  the event will “move to a later date in the spring.”