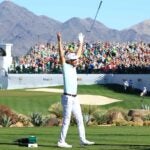 The scene from OUTSIDE the stadium seating at the 16th shows just how crazy the one inside it was.

The scene inside the 16th hole at TPC Scottsdale yesterday afternoon spoke for itself. There was a hole-in-one, then there was complete pandemonium. The crowd reaching ear-drum shattering decibels, the utter chaos on tee, the beer showers — it was as if the WM Phoenix Open faithful had gone to a party … then a golf tournament broke out.

But, if you needed any further evidence of just how insane it all was inside the 16th, perhaps it’s best to look out.

Matt Wallace wasn’t standing on the 16th tee box when Sam Ryder’s 124-yard wedge shot rolled into the bottom of the hole for an ace. He wasn’t even on the course. Rather, Wallace was part of just a small group grinding away on the practice range at TPC Scottsdale, which rests just a few football fields from the stadium construction of the 16th.

The 31-year-old had missed the cut at the Waste Management and was living the unglamorous life of a PGA Tour grinder — using the weekend days to try to solve the two-way miss that’d kept him from contention in Scottsdale. With caddie Gareth Lord filming from behind, Wallace got to work on his swing, but only for a moment. Seconds after sending his drive into the ether, Wallace’s head whipped around to his left.

Off in the distance, cheering erupted into a full-fledged roar, reaching a deafening pitch. Wallace knew what the noise meant. He pointed into the distance.

Lord zoomed the camera shot into the distance, where you could see specks flying from the top parts of the stadium seating. Without a cloud in the sky, it’d started raining in the desert.

“Look at the beers,” Lord said with a laugh.

The video lasted just 24 seconds — during which time the only visible golf shot was that of a player who’d missed the cut the day prior — and yet it captured the ridiculousness of the moment as well as any shot from inside the 16th.

“Forget the swing….come to watch the reaction for Sam Ryder’s Hole in One! @pgatour 😂😂🍺🍺,” Wallace tweeted later in a post that has since received 9,000 likes.

The Waste Management: golf’s “greatest show on turf” … even when you can’t see it.