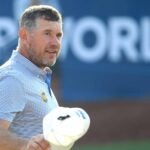 Lee Westwood finished in second at the DP World Tour Championship Sunday, a result that earned him enough points to win the Race to Dubai.

Lee Westwood won when he lost on Sunday at the DP World Tour Championship.

Yep. Lee Westwood lost the DP World Tour Championship on Sunday in Dubai. But in losing, Westwood leapfrogged Patrick Reed, won the European Tour’s Race to Dubai and was coronated Europe’s top golfer for the third time. Here’s how it happened.

Westwood entered the week at the DP World Tour Championship trailing Reed in the standings for the European Tour’s season-long Race to Dubai. But with a bundle of points up for grabs in the season’s final event (much like the PGA Tour’s FedEx Cup), Westwood and a few other golfers held an outside shot at claiming the Race to Dubai and its $2 million first prize.

Heading into Sunday, Reed controlled his fate. Thanks to his points lead, he was poised to claim his first-ever Race to Dubai crown without needing a victory at the DP World Tour Championship. So long as the 2018 Masters champion held his ground on Westwood on Sunday, he’d likely claim enough points to beat out Matthew Fitzpatrick, who led the tournament.

But Lee Westwood was ready for a charge of his own. The 47-year-old carded a final round 68, besting Reed’s Sunday 70 and leapfrogging him for second place at the DP World Tour Championship. Westwood’s second-place finish came with 1,335 points, enough to overcome Reed on a second leaderboard: the Race to Dubai standings.

“It’s difficult to take it all in right now,” Westwood said. “Obviously it’s been a bizarre year for so many reasons. The combination of it all here, it was a great finish. It was an exciting finish to the year, it’s really hard to quantify.”

“It’s been 20 years since I sat there at Valderrama and finished second in the American Express Championship to win the Volvo Order of Merit as it was back then,” he said. “I won here in 2009 to win the Race to Dubai and now I’ve finished second to win it today.

Westwood’s victory is an interesting addendum to one of golf’s most turbulent careers. In 2010, Westwood famously unseated Tiger Woods atop the Official World Golf Rankings, ending the 15-time major champion’s yearslong reign as World No. 1. Yet Westwood could never get over the hump at the majors (amassing top-five finishes in each of the major championships but no victories) or on the other side of the Atlantic (he has just two PGA Tour victories).

But as Europe’s top golfer again, the 47-year-old’s victory underscores his place on the mantle of the continent’s top players.

“The motivation’s never changed, really,” he said. “I get to get up each day and do the job I love. I’ve always wanted to be a golfer and I don’t want it to end.”