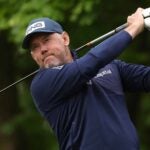 Lee Westwood has officially requested a release from the PGA Tour to play in the Saudi Arabia-backed LIV Golf Invitational Series.

After months of rumors and speculation, the field for the first LIV Golf Invitational Series event is taking shape.

Lee Westwood confirmed Wednesday that he is among the golfers who have asked the PGA Tour for a release to play in the first LIV Golf event in England next month. The former World No. 1 explained his decision in an interview with Sky Sports at the British Masters.

“It’s an opportunity to play in a big tournament against some of the best players in the world in England,” the Englishman said. “I love playing in England in front of the home fans. Any time there are opportunities like that, I feel like I should take it.”

All eight LIV Golf Invitational Series events will have a $25 million purse each. However, the source of the cash has been a point of contention for critics of the new league. The series is funded by Saudi Arabia’s Public Investment fund, from a government with a history of human-rights violations.

Despite the source of the money, Westwood defended his decision to seek a release.

“We’ve played European Tour events in Saudi Arabia,” Westwood said. “There’s a Formula 1 race there, Newcastle (United Football Club) is partly owned by people from Saudi Arabia. There’s been fights there — boxing fights. I think there’s been snooker and darts there as well. Golf is not the first sport to have links with Saudi Arabia, but it seems to be coming under more scrutiny than anywhere else. Whether you think that’s right or not is the individual’s opinion.”

Public opinion is not the only deterrent for players thinking about entering the big-money events. The PGA Tour has been rumored to threaten suspensions or bans for players participating. And there is speculation that the DP World Tour could punish European stars with bans from future Ryder Cup captaincies.

“That ball is in the European Tour’s court,” he said. “I have no influence over the way they think. I’m an independent contractor — I work for myself. It’s my job, and I have to do what’s right for me.”

Westwood joins Robert Garrigus and Phil Mickelson (through his agent) as those who have publicly acknowledged they requested releases to play in the first LIV Golf event.