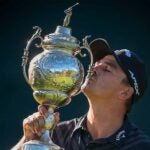 “It’s unbelievable to stand here with an Open win,” he said after the round. “It’s any South African golfer’s dream to win a national tournament. It’s unreal.”

But Sunday’s dream victory only speaks to a fraction of Bezuidenhout’s improbable run.

It’s possible by now you’ve heard Bezuidenhout’s story. As a child, he accidentally consumed rat poison, the effects of which left him with a stutter and anxiety into adulthood. As an amateur in 2014, a prescription to treat the effects of his accidental poisoning caused him to fail a test for performance-enhancing drugs, which resulted in a nine-month suspension from golf.

In the years since, Bezuidenhout’s career has rounded into the model of consistency. He flirted in contention at dozens of Euro Tour events, finally grabbing his first win in Spain in June of 2019. Still, his results on the biggest stages (solo 2nd in Dubai, T3 at the BMW PGA Championship) seemed to indicate he possessed another gear.

It seems clear now that Bezuidenhout has found that gear. His win Sunday at the South African Open was his second in as many weeks, making him the first golfer since Justin Rose in 2017 to win back-to-back European Tour events. In the past two weeks alone, the 26-year-old has now eclipsed the total number of victories from the first seven years of his European Tour career.

What the pair of performances mean for Bezuidenhout’s future, on the other hand, is immense. He heads into next week’s DP World Tour Championship — the final event in the European Tour’s season-long Race to Dubai — ranked fifth. While he’s surely an underdog against the likes of Patrick Reed, Tommy Fleetwood and Collin Morikawa, it’s hard for Bezuidenhout not to dream about a third-straight victory, and with it a chunk of the race’s $7.5 million purse.

For now, though, it’s time to enjoy the tectonic shift in his career properly: with a drink and a celebration.

“Yes I’m flying out [to Dubai] tomorrow night early. I’ll drove home after this and spend some time with the family at home,” he said. “Probably a smaller drink, but the same dance.”