Kiawah Island Ocean Course’s actual yardage? The PGA host is shorter than it could be 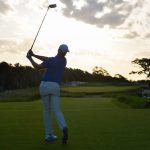 Kiawah Island is playing to 7,660 yards on Thursday.

KIAWAH ISLAND, S.C. — All week, there’s been chatter about just how long Kiawah Island’s Ocean Course is playing. The final five holes, which play directly into a prevailing wind, forced pros into the rare indignity of — gasp — hitting long irons or even fairway woods into par-4s. On Wednesday afternoon, several pros pulled driver at the par-3 17th.

This was, after all, the longest major championship course in history.

But as so often happens, the actual yardage and the scorecard yardage didn’t match up. On the card, Kiawah tips out at 7,876 yards, out-beefing the 7,741 yards Erin Hills played to in 2017. On Thursday, tournament organizers set it up at 7,660. Six tees were moved up by 20-plus yards. The course would play long — just not as long as it could.

To some extent, that’s the point of the tees at the Ocean Course. Versatility! Wind dictates difficulty here, and with 156 detail-oriented golfers in the field it’s easy for play to get slow. Course designer Pete Dye build plenty of tee boxes for that express purpose, knowing how differently the course could play day to day.

Several pros spent the early part of the week lobbying against tipping things all the way out.

“Unless the PGA wants seven-hour rounds, I wouldn’t advise it,” Justin Thomas said on Tuesday.

“From 14 on, I think the shortest iron I hit into a green was a 5-iron,” said Jon Rahm, hardly a short-knocker, after his practice round. “I was playing with Zach Johnson, and I think he pulled a head cover on every single hole except the par-5 16th, coming into the green.

“For the sake of our sanity, I believe they’re going to use a couple forward tees.”

One round in, their sanity is likely to remain intact. Several of the shortened holes, like the beefy 18th, will play into the wind on Thursday. But not all of them. Two par-5s — Nos. 7 and 11 — were shortened by 28 and 22 yards, respectively, despite playing downwind. (Zach Johnson, who has never been mistaken for Bryson DeChambeau, hit iron into 11 and made eagle.) They yielded birdies by the handful.

The Ocean Course is known as one of the most difficult courses in the world. It boasts a course rating of 79.1 and a slope of 155, the USGA maximum. While landing areas are relatively wide for pros, the course does not treat big misses kindly.

“I wouldn’t say the Ocean Course is one that you venture to for fun,” Kevin Kisner said earlier in the week. “I come down here for vacation with my family. I think I’ve played it one other time with my wife’s side of the family, her dad and my brother-in-law on that side. They wanted to come and play and see how difficult it really was, so we came out here and laughed at them one afternoon.”

On Thursday morning, the wind was relatively light — light, at least, for a course that borders the open ocean. Cameron Tringale went out in three-under 33. That showed it could be done, even if you would have had a difficult time matching him.

Yardage, of course, isn’t everything. In 2012, the last time Kiawah hosted the PGA, Thursday’s round was played from a nearly identical distance: 7,668 yards (the longest in major history to that point). It was a fine day for scoring and Carl Petterson shot 66. On Friday, they shortened the course to 7,521 yards, but the wind blew in the 20s and into the 30s all day. The scoring average ballooned to a preposterous 78.11.

In other words, yardage is just one of the numbers that matters this week. Wind speed. Green speed. Paces the holes are cut from the edge of the green.

Where will the numbers go the rest of the week?