‘We came out here and laughed at them:’ Pro’s family played Kiawah 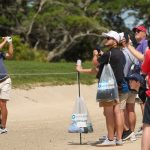 Kevin Kisner hits a shot at the Ocean Course at Kiawah Island during Monday's PGA Championship practice round.

The Ocean Course at Kiawah Island, according to those who will play it at this week’s PGA Championship, is:

“A brutal golf course,” Will Zalatoris said. “You’ve got to hit it good. There’s no faking it around this place. Every aspect of your game has to be on.”

“Tough,” Xander Schauffele said. “I read that the scoring average in 2012 was 74.5 or 74.6, which was the second-hardest tournament the guys played in 2012. With it being windy and sort of a constant wind and breeze, I feel that it’s going to be a very difficult task and a big ask on certain holes.”

But what about for the regular folk? The Pete Dye gem is No. 6 on GOLF’s Top 100 Courses You Can Play list, and for $463, you, too, can walk where Will, Xander and Bryson will be walking this week in South Carolina. Which, recently, is exactly what the in-laws of South Carolinian Kevin Kisner wanted to do.

“I wouldn’t say the Ocean Course is one that you venture to for fun,” said Kisner, who will be playing in his seventh PGA Championship this week. “I come down here for vacation with my family. I think I’ve played it one other time with my wife’s side of the family, her dad and my brother-in-law on that side. They wanted to come and play and see how difficult it really was, so we came out here and laughed at them one afternoon.

“I don’t play much golf when I come to Kiawah. Rather be there by 14 tee at the beach club hanging out than standing on the 14th tee.”

Can’t blame him. At 7,876 yards, it’s the longest track in major championship history, and with Atlantic Ocean breezes, it could stretch longer. Still, for someone who grew up about three hours west of the course, this week is more pleasurable than painful. And like any good host, he was happy to show off his home.

His Tuesday press conference “tour,” starting with the course as a whole:

“It’s just a great test overall,” Kisner said. “It’s visually tough off the tee, but there’s plenty of room, and then when you get winds up in the 15 to 20, it makes the into-the-wind holes that much harder. We played the back nine today, and you turn on 14, and that stretch, those last five, it was just wearing you out with the long clubs.

“You catch the downwind holes you can make some birdies if you can drive it in the fairway and have some shorter shots in. The greens are still somewhat receptive even downwind, which makes it nice to be able to make some birdies.”

The greens, whose complexes are relatively raised:

“I was telling my coach out there, I feel like I’m going to have neck problems from having to look up so much on all the pitch shots,” Kisner said. “The condition around the green is just perfect the whole way, so you get really good lies, and if you hit a good shot, you can control your spin and your height.

“They give you a chance. I think the biggest key is you’re going to see guys, if it blows like this, missing it further away from the hole to be able to chip it into the wind. Because the greens aren’t overly fast, they can’t be, and they’re not overly firm, so you can really get the ball up-and-down a lot with how good they are and the condition if you can use the wind as your friend.”

The par-3 17th, which can stretch up to 230 yards (and led GOLF’s Luke Kerr-Dineen to write a story entitled “Kiawah’s 17th hole, and the difference between brutal and ‘bad’ golf holes.”

“Lord hope that we’re going to play a tee up,” Kisner said. “Today we played it at 202 from the front edge of the back box, so we were trying to hit a 235-yard shot over water to an area about 13 yards wide.

“I tried to hit a 7-wood; was unsuccessful. That’s not a very easy shot into the wind. Depending on where they play it and where the flag is, I think you have a range from 5-iron to 3-wood.