One key to Jason Day’s resurgent play? A putter switch to an old favorite 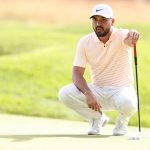 Jason Day is back in the mix at the Travelers Championship, leading the field by one shot at the tournament’s halfway point. Day fired a tournament-low round of 62 on Friday — eight under par — and while a round like that is indicative of all cylinders firing, it was his putter that really made the difference.

Day’s lag putting was excellent when necessary, and he drained a whopping five crucial putts over 10 feet — including a 36-foot bomb for birdie on the par-3 5th.

Day’s resurgent play is a welcome development for fans of the 33-year-old Aussie, who has struggled with back issues and hasn’t won on Tour since the 2018 Wells Fargo Championship. Day’s best finish thus far this season is T7 at the AT&T Pebble Beach Pro-Am and Vivint Houston Open. The former World No. 1 is now ranked 71st and didn’t qualify to play last week’s U.S. Open.

But this week has been a different story, and much of Day’s success can be attributed to his flatstick — a club he recently swapped in favor of an older model.

Perhaps not coincidentally, a Spider was in the bag for Day’s last win in 2018. Can he rekindle the same magic through the weekend at the Travelers to claim his 13th career Tour title?

He’s certainly off to a good start.