Justin Thomas is managing change, both on the golf course and off it 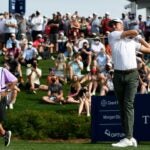 Justin Thomas tees off on Saturday on the par-3 17th hole at TPC Sawgrass.

PONTE VEDRA BEACH, Fla. — Justin Thomas is single and focused. He’s an only child, bright and talented and engaging. If he never wins another golf tournament, he’ll likely wind up in the World Golf Hall of Fame — 18 or more years from now. You have to be 45 or older to get in. Justin Thomas is 27.

On Saturday, he shot 64. He’s in contention to win this Players Championship, three shots off the lead. He must be relieved, to finally put a Justin Thomas score on the board.

I am, too. Golf is a frail, frail thing, at every level.

Justin Thomas is easy to root for. But prior to Saturday, I had been worried that he might have actually lost golfing mojo, in the wake of this odd and difficult year he has had.

— In early January, in Hawaii, Thomas used a vulgar, homophobic word, directed at himself and picked up by a live mic. It cost him his Polo contract and caused him (appropriately, I would say) to question himself.

— In early February, his father’s father, the patriarch of three generations of professional golfers, died. Paul Thomas was 89, but ends are ends and they are never easy and he and Justin were close.

— In late February, Tiger Woods, Thomas’ mentor and childhood hero, flipped his courtesy-car SUV on its side, resulting in complicated surgical procedures and a series of unanswerable questions about what Woods’ future will bring.

In Thomas’ three Tour events since his regrettable comment, he has finished 13th in Phoenix, missed the cut in Los Angeles and finished 15th at the WGC event in Bradenton. In late January, he flew to Abu Dhabi to play in a European Tour event there and missed the cut.

None of that might sound like a ringing alarm for he’ll never win again. But when David Duval won the British Open in 2001, at age 29, would you have guessed that would be his last win (to date) on the PGA Tour? When Curtis Strange won the 1989 U.S. Open, after winning the ’88 U.S. Open, who would have thought that that he would be his last win (to date) as a professional golfer?

Golf is a frail, frail thing.

“I’m doing OK,” Thomas said in a pre-tournament session with reporters this week. “I have definitely been better.”

The candor was both notable and admirable.

Thomas shot a third-round 64 in Phoenix. If you can shoot 64, you still know how to play golf. But not all 64s are created equal. And the Waste Management Phoenix Open, with all due respect, is not The Players.

One good round — his 64 here at the Stadium Course on a still, warm day — is not to be confused with four good rounds. Four good rounds is not the same as winning.

But there was something about the way that Thomas went about his business on Saturday, even though he was playing a free-wheeling round from way back. The round and his demeanor and analysis of it told you we will be hearing from him again late on a Sunday, and probably will be for years to come.

It’s likely he’ll be in contention for this Players title right through the long shadows of Sunday afternoon.

“Golf is so fun when you’re playing well and when things are going well it’s really easy,” Thomas said on Saturday. “But this game isn’t like that, unfortunately.”

He’s not turning back the clock, because that cannot be done. He’ll play on Sunday as a different man than he was on Jan. 1, with different clothes on his back and a different mind-set in his head. In golf as in life, we all need to manage change.