Nearing 50, David Duval remains as intriguing as ever (as does his reading list) 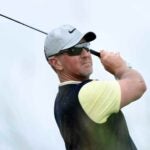 It’s been nearly 20 years since David Duval won his last PGA Tour event, but he remains a shrewd observer of the game, and of life.

Way back in the year 2020, when Charlie Woods had his coming out party at the Father-Son event in Orlando in December, his father, Tiger Woods, had an unexpected reunion with David Duval. They hadn’t played together in at least 15 years, although they do have a dinner together once every five years, when various former British Open champions gather to lift their snifters and pass the haggis, in a clubhouse beside an Open venue.

If the R&A used an alphabetical seating chart, Duval would be seated beside John Daly (now there’s a good match) and Woods beside Tom Watson (less so), but that’s not how it goes. You sit where you want. Daly’s pants arrive before he does. Mark Calcavecchia can’t find his sport coat. It’s all good. It’s 2021!

Duval, who turns 50 in November, won the Open at Royal Lytham almost 20 years ago, in the summer of ’01. The world was in a different place, as was he. (“Everybody changes and grows and matures,” Duval said at the Father-Son.) Flying home from Lytham on a private jet, he was 29, slim and fit and fast. In those days, he was a Tour mainstay, with a top button often buttoned and shirttails often hanging out.

He hasn’t won on Tour since his win at Lytham. (The Open counts as a PGA Tour event; the Dunlop Phoenix Open in Japan, which Duval won four months after his Lytham win, does not.) Still, with the Open win, plus a Players title, a dozen other wins and Ryder Cups and World Cups and a Tour round of 59, he deserves a locker at the World Golf Hall of Fame.

That’s what you get upon election, or you used to. The whole thing is being reconsidered. Anyway, if Fred Couples and Tim Finchem are Hall of Famers, then Duval is a Hall of Famer, too.

You ready for some parlor-game fun? OK: You’re about to play the last round of your life, in a twosome, and you have to pick a playing partner among the three TWs cited above. Who you gonna pick? Who do you suppose Duval would pick?

Duval has logged a lot of rounds with Woods (they were Nike stablemates), some rounds with Watson (Watson never liked his strong grip) but he missed the Weiskopf era completely. He’s gotta go with Weiskopf, right? It’s fun to consider the two of them strolling down a fairway together. They both won an Open and no other majors. They both have Nov. 9 birthdates, although in very different years, Tom in ’42, Double D. in ’71.

You could imagine them comparing notes on Kierkegaard. You know, “Life can only be understood backwards; but it must be lived forwards.” Also, the perils and pleasures of golf commentary on live TV. Weiskopf was excellent at it. Duval is, too. Both, really, way underrated, although with different styles. One of Weiskopf’s gifts was to get things down to their essence. Duval can see the layers underneath the layers.

Duval was, and remains, famously, introspective. Flying home from that British Open win, the Claret Jug beside him, he reportedly said, “Is that all there is?” For some years, every piece about Duval made reference to his interest in Ayn Rand, queen mother of a philosophy called Objectivism and author of the novels The Fountainhead and Atlas Shrugged.

The other day, by phone, I asked Duval about his pandemic reading list. “I read a lot of mindless books,” he said. “Action books, mysteries, thrillers.” Turning to nonfiction, he said, “I’m reading Matthew McConaughey’s Greenlights. Really liking that. I’m reading 50 Years of Golfing Wisdom, by John Jacobs. Let’s see here. Classic Christianity. The Inner Game of Golf. That’s the stack.” I could not tell if he was looking at a literal stack. He was.

I recall once seeing him in a restaurant, I think on Ocean Avenue in Carmel-by-the-Sea, Calif., eating dinner alone and reading a book. My dream.

Looking over my notes here, I see Duval cited other writers and books. The poet Charles Bukowski, once described by Time as “the laureate of American lowlife.” The novelist Tom Robbins, most famous for Even Cowgirls Get the Blues. The novelist Harry Crews, author of The Hawk is Dying. Ed Bunker. “So fierce,” Duval said. I thought he was describing the writer’s work. (I had never heard of him.) Turns out, that’s the name of one of Bunker’s books. So Fierce.

We talked about this and that, how Duval, as a commentator, goes for why — why players do the things they do. He described a long-ago Nike ad, where a gang of Tour hoodlums plot to steal a club belonging to Tiger Woods. Duval was trying to remember if Woods was even at the shoot. It was a long time ago. We talked about his son’s golf game (it’s good) and Lee Westwood’s chipping game. It’s good, too, despite what they say on TV.

Regarding Matthew McConaughey’s Greenlights, Duval said, “His questions are not normal questions. He’s a person quick to point out his own faults.”

After about an hour, it was clear that Duval wanted to move on to other things with his day. He said he’ll work a half-dozen or so events on TV this year. I forgot to ask him about his plans for the senior tour. I didn’t get anywhere when I asked him about his old is-that-all-there-is comment.

“What are we doing here,” Duval said, signaling the end was nigh. “Writing a book?”