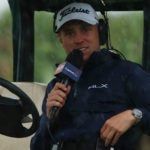 Justin Thomas was one of the on-course announcers for The Match: Champions for Charity.

Phil Mickelson missed a chance at a birdie.

We missed a chance at even louder chirping.

As Mickelson examined his opportunity for a 3 on the par-4 9th during Sunday’s The Match: Champions for Charity, announcers Justin Thomas, Charles Barkley, Trevor Immelman, Brian Anderson and Amanda Balionis were examining the previous shot by Tiger Woods, one of Mickelson’s opponents. Woods dropped his 25-yard bunker shot about two feet from the hole, and Immelman and Anderson were in awe. Barkley wasn’t.

“Well, in fairness, he is a golf pro,” Barkley said. “If I saw a guy dunk a basketball, I wouldn’t get all excited about it.”

As Mickelson putted and missed, Thomas said he would be in awe of something else.

Thomas wishes his slam could have been louder.

“I had heard it, and obviously I wish I could have given it with a little more delivery, but because Phil was putting I had to say it very quietly into the mic,” Thomas said this week on SiriusXM Radio’s Gravy and the Sleeze show, hosted by Colt Knost and Drew Stoltz of GOLF.com’s Subpar podcast.

“He put it up on a tee for me, and I was just like, ‘Man, I really want to say this back,’ and as soon as everyone stopped talking, I was like, ‘Oh, perfect.’ I said it, and Amanda was in front of me, and she just turned around and looked at me. She’s like, ‘You can’t say that.’ I just kind of shrugged my shoulders and said, ‘Well, I already did so there’s not much you can do about it now.’ ”

Quiet or not, Barkley did hear it, and he responded in his comical fashion.

Still, he could have seen it the other way around.

“You can’t let an opportunity like that go pass Charles because you know if he had it he would do the same thing to you,” Thomas said on the Gravy and the Sleeze show.