Justin Thomas: ‘I want to break everything in sight right now’ 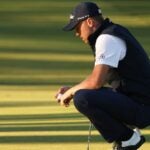 Justin Thomas was not happy coming off the course after the final round of the U.S. Open.

It’s safe to say players did not have fun at the U.S. Open this week. Sure, they got to compete on a legendary track, and a boatload of cash was doled out by week’s end, but sometimes even money can’t console you after taking a beating on the course. Paul Azinger made that much clear in 2006 when he defended his decision to skip the U.S. Open at Winged Foot.

“I know this for a fact,” he said. “Only one guy is going to have fun, and he won’t have fun until Sunday night.”

Turns out, he was right. Other than the triumphant Bryson DeChambeau, there was nary a smile on any player’s face walking off the 18th green. And if there was a grin spotted, it was only because they’d finally escaped the hellscape they subjected themselves to over the past week.

Justin Thomas was particularly sour when he walked off Winged Foot for the final time this week. He fired a closing 72 — almost three strokes better than the field scoring average — but a bogey-double finish dampened what was otherwise an excellent round of golf. He made his displeasure clear in his post-round interview.

“I mean, I want to break everything in sight right now,” Thomas said. “Golf is the last thing on my mind.”

It’s a bad day to be an inanimate object within Thomas’ reach. Though there haven’t been any reports of property damage at Winged Foot, we’ll keep our ear to the ground.

But that’s what the U.S. Open, particularly one contested at Winged Foot, does to you (unless you’re DeChambeau, apparently). It nitpicks at every imperfection of your game and, slowly but surely, breaks you. Danny Lee showed us as much yesterday with his six-putt on the final green. When you’ve had enough, you’ve had enough.

“It’s an unbelievable golf course. It’s for sure my favorite U.S. Open venue I’ve played,” Thomas said. “(Winged Foot) is fair. If you play well, you can score and make birdies. For the most part, a lot of the pins are bowl pins, but if you don’t, it’s brutal. I just think it’s all right in front of you. It was not overly firm. It was not overly fast. The USGA did a great job setting it up for us this week.”

This time, it seems, the USGA got it just right.