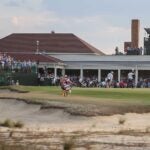 Pinehurst No. 2 last hosted the U.S. Open in 2014 when Martin Kaymer was victorious in a runaway.

There is about to be a lot more of the USGA in Pinehurst, N.C.

The governing body of golf in the United States will be bringing multiple operations — including about 50 employees — and many more U.S. Opens to central North Carolina.

In an agreement signed with the local community — Pinehurst is a village, with its own council and mayor — and state, the organization will construct multiple buildings and house some of its operations in Pinehurst. According to the arrangement, Pinehurst will host the U.S. Open once every five to seven years. As was announced Wednesday, Pinehurst No. 2 will now host the 2024, ’29, ’35, ’41 and ’47 U.S. Opens.

Pinehurst will also host future Women’s U.S. Opens and other USGA championships, but those dates have not been announced.

“We really took our cues from the players and from fans, who said, ‘Fewer places, more frequently,'” said Craig Annis, the USGA’s chief brand officer, speaking of U.S. Open scheduling. “They want to gain a more intimate knowledge of the course. The players do, and the fans. They want to know what to expect. And they want more clarity around where we’re going and when. And so this is the first important piece.

“We’re going to be working on some other agreements with other host clubs for longer term deals as well to round out the plan for where we go. But it certainly represents a strategic shift for us.”

A limited number of U.S. Open venues is similar to what the R&A has developed in its Open Championship rota, with St. Andrews as its centerpiece. Here in the U.S., as USGA CEO Mike Davis said in a Wednesday press conference, “We truly are coming to the home of American golf.” It was a move that was in the works and nearly ready for announcement in February, but the coronavirus spreading rapidly across the country changed the course of action.

Golf House Pinehurst will also have a satellite section of the USGA Museum and administrative offices. In total, the USGA will house 50 full-time employees in Pinehurst, or approximately 16% of its staff.

The entire project encompasses $25 million in spending over the coming years. Davis announced construction for the buildings will begin in spring of 2022 and will hopefully be finished in 2023.