‘Couldn’t even fathom shooting a score like that’: Pro tells vintage Spieth story from junior days 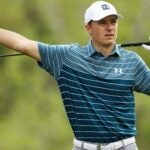 Even if Jordan Spieth stopped playing golf today — with 11 wins and three major titles — he’d be a near lock for the Hall of Fame. His resume is already great, and it’s likely to get better. But before he became one of the biggest names on the PGA Tour, he was merely a junior golfer living in Dallas in pursuit of the ultimate dream. Even then, though, people knew he was destined for big things.

As a member of the Dallas Jesuit golf team, Spieth became the first player to win three consecutive individual state titles (a feat since matched by fellow Dallas native Scottie Scheffler) and won the U.S. Junior Amateur twice, joining Tiger Woods as the only other player to win the championship more than once.

Spieth’s lore far predates any of his professional success, and many of his feats have been well documented. But there are still some old tales that have yet to be unearthed. Luckily for us, Spieth grew up competing in Dallas with some other successful golfers who played against him often. One of them is PGA Tour pro Will Zalatoris. As Zalatoris remembers, Spieth was always the favorite when he teed it up in junior golf.

“Anytime he played it was kind of like, ‘All right, here we go, what’s he going to win by?'” Zalatoris told reporters at the AT&T Pebble Beach Pro-Am.

And while Spieth won plenty of tournaments in those days, the quintessential Spieth story that sticks out in Zalatoris’ mind didn’t occur in tournament play, but rather during a casual round shared by the two in their early teens.

Zalatoris’ family belonged to Bent Tree Country Club in Dallas, and one day the two ventured out for a casual afternoon round. Spieth flared his tee shot well right on the first hole, hit his approach in the bunker, blasted out and then jarred a 30-footer for par.

Sounds familiar, huh? The rest of the round was more vintage Spieth.

As an 11-year-old a few years younger than Spieth, Zalatoris was in awe. But according to him, it wasn’t anything out of the ordinary for the next-big-thing in junior golf.

“Just expect a couple ridiculous 30- or 40-footers and maybe a chip in per round,” Zalatoris said of Spieth. “It’s been fun seeing (him) grow.”

Get Jordan Spieth’s look in our Pro Shop