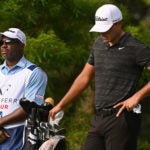 Joseph Bramlett bows his head during the Korn Ferry Tour's 8:46 moment of silence on Thursday.

The death of George Floyd while in police custody on Memorial Day followed the recent news of the deaths of Breonna Taylor and Ahmaud Arbery. The country was at home due to the coronavirus pandemic.

Joseph Bramlett, one of the few black players in professional golf, has not been surprised by what has transpired since.

“Honestly, it was a ticking time bomb,” Bramlett said Thursday, following his first round in the Korn Ferry Tour’s Korn Ferry Challenge at TPC Sawgrass.  “Everybody’s sitting in their living room, everyone’s on their phones all day, and you blatantly saw a cop murder a black man right in your living room, essentially.”

“And I think that brought what people would chalk up to being black urban legends, it brought it right into their living rooms, and people were forced to see it, to face it and to think about it,” Bramlett continued. “And it pissed a lot of us off.”

Bramlett, who is biracial, said the reaction, including golf’s, has been a positive.

People have reached out to him. They’ve texted. They’ve told him “they’ve started to really reflect on some of their views in life and how they see the way things work in this country.”

This week, at both the Korn Ferry tournament and the PGA Tour’s Charles Schwab Challenge, a moment of silence at 8:46 a.m. local time was observed to honor the work to end racial and social injustice in the country, with the time recognizing how long Floyd was pinned to the ground by a former Minneapolis police officer Derek Chauvin before dying on Memorial Day. The 8:46 a.m. tee time was also kept open, and all golfers on the course came to a stop.

Bramlett said he “reflected on my heritage.”

“I’m in a unique place where I’m mixed – I’m white and I’m black,” he said. “It’s something that I’ve been raised with. I’ve grown up to and was taught a lot about some of the challenges the black community faces in this country. For me, I thought unfortunately the murder wasn’t really that surprising. I really just kind of sat and thought about how grateful I was to be in the position I’m in, in this world.”

Bramlett said he did not have “any George Floyd-type stories.” Growing up in golf, he said he got a few funny looks, but “all in all, all encompassing, I’ve had a great experience with golf.”

He said others made that possible. He wants to do the same.

“There are a lot of things I can do and I’m trying really hard right now to sort through what is the best path for me,” said Bramlett, who requested the time to talk, according to Golfweek. “I think first and foremost, I can be a good role model, and I can be someone of understanding. I think my heritage is unique in this situation and I feel like I’ve got a little bit of a foot on each side of the fence, and I can kind of see where a lot of people are coming from.

“As of right now, I’m just really trying to do some soul searching within myself and just be me. Just try to be a good, positive role model and be grateful for where I am, and I’m going to speak up for what I believe.”