How does Jordan Spieth’s resurgence measure up? We crunched the numbers to find the best comebacks ever 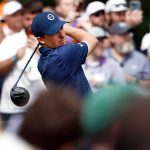 The PGA Tour no longer hands out an award for Comeback Player of the Year, but we all still love return-to-greatness stories. And in 2021, there hasn’t been a bigger one than Jordan Spieth, who, in early April, captured the Valero Texas Open to end a nearly four-year victory drought.

Spieth is a fan favorite, and his win was wildly popular. But how did his return to the mountaintop measure up statistically? I thought it would be fun to turn an analytical lens on the subject to arrive at a ranking of players who had the longest time between two great stretches of golf.

To start, some parameters were in order. Looking solely at the time between wins wasn’t going to cut it in my view, because one win isn’t enough to qualify as a sustained stretch of greatness. What about the Official World Golf Rankings? After winning the British Open in 2017, Spieth was the No. 2 ranked player in the world. He fell to 92nd at the beginning of 2021 and has now climbed back to 23rd. If we defined “greatness” as cracking the top 10, then Spieth’s current comeback would fall short. For our purposes, though, one of the problems with world rankings is that they are based on points average over a two-year period, longer than what I think of as a “stretch.” I wanted a measure with greater specificity and quantitative depth.

So I turned to the same point system I relied on to identify the hottest five-event streaks in golf (September-October 2020), which awards 100 points for a major win, 60 for a second-place showing and so on. Using that scale, a stretch of golf qualifies as “great” if a player’s average points for 10 consecutive events is 10 or higher. With those guidelines, I went back to 1983 to find players who had the longest interval of events between two great stretches of golf.

The winner is a Hal of a player. That’s right. The longest return-to-greatness stretch belongs to Hal Sutton, at 345 events spanning the years 1986 to 1998. Over three consecutive events in 1986, Sutton won the Memorial, finished 4th in the U.S. Open and 2nd in the Atlanta Golf Classic, amassing 119 points. After a missed cut at the Southwest Golf Classic later that year, Sutton’s 10-event points average dropped below 10, ending his stretch of greatness. It wasn’t until his win at the Tour Championship in 1998 that his 10-event points average again exceeded 10. That stretch included another win at the Buick Challenge and a 4th-place finish at the Canadian Open.

When it comes to Spieth’s performance, this same methodology identifies a great stretch in 2017 that included finishes of 2nd, 2nd, 7th and 7th in the four FedEx Cup playoff events. That great run lasted until a missed cut at the 2018 Valspar Championship. Spieth’s return to greatness took 69 events and coincided with his 2021 Valero win, a 10-event stretch that included a T3 at the Masters and three other top-10 finishes. (So far this season, Spieth has gained nearly 1.5 strokes per round on the competition, with a 0.5-strokes-gained improvement in both approach shots and putting.) His fallow period was prolonged, no doubt, but it ranks 4th on the all-time list.

Which current players have been waiting the longest for their return to greatness? You’ll note in the chart that Stewart Cink ranks 4th on that list, which you might find surprising. Given his fine play of late, hasn’t he already returned to greatness? Not statistically.

Leading the waiting-for-greatness list is Charles Howell III, at 387 events and counting. His last great 10-event stretch featured a win at the 2007 Nissan Open and three other top 10s. If he can ever return to glory, what a comeback story that will be.