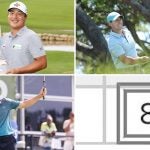 Who's going to get it done at Kiawah Island this week?

Welcome to the Monday Finish! This is where we’ll tally the scores for the week that was and tee you up for the week to come. Entering PGA Championship week, let’s tackle this week’s inspiring winners, some unlikely predictions for Kiawah Island and how I torpedoed my U.S. Open qualifying chances with just one swing.

The power of perseverance.

The most enduring moment of my golf-watching week came when all the action was complete and Byron Nelson champ and South Korea native K.H. Lee stepped up for his winner’s interview with Amanda Balionis.

Lee’s coach Jin Park stood beside him to serve as translator, but Lee decided to tackle the questions in English instead.

“Still I can’t believe it,” he said. “After this time, more believe in me, stronger in my mind — perfect for me.

“I can’t believe,” he concluded. “So excited. I need to learn English, but very, very happy and very thankful.”

His gratitude came through loud and clear. Perhaps Lee would have felt more comfortable tackling questions in his native Korean, but there was something inspiring about him braving a foreign language in the most important interview of his career to date — and his first win in 80 PGA Tour starts.

Eighty starts, though, pales in comparison to the 478 it took for Richard Bland to claim his first European Tour victory at the Betfred British Masters on Saturday evening. Bland’s tee shot on the first playoff hole cleared the penalty area by a whisper and led to a fantastic finishing birdie. His press conference was chock-filled with the gratitude, candor, and wisdom of a man who has lived a full career in professional golf.

On his winless streak:

“Finally I can go off that list of ‘most starts without a win.’ A big incentive for me was that I wanted to get to 500 events, this will allow me to do that, which I’ll be hugely proud of. To play 500 events out here is a pretty good career.”

On losing his card:

“It took a lot of guts to go back to the Challenge Tour at 46 years old. You’re probably old enough to be most of the guys’ father. I got my head down, I’m pretty good at that. When I put my mind to something I can just get my head down and go and do it.”

On golf, and life, in balance:

“I think a lot of people on TV see golf through the eyes of the Rorys, the Dustins, the Brooks Koepkas, and everything looks great and obviously we’ve seen the struggles that Rory has had recently. Sometimes you don’t know what’s going on behind closed doors…I think as you get older, golf isn’t everything, there are more important things to life. There’s family and everything else. But you still give it your all and you practice for days like these.”

On his next win:

“It might be like buses, two come along in quick succession. Right now I’m really pleased I’ve got my hands on this one.”

We’ve already covered this ground, so let’s make it supplemental:

K.H. Lee won the AT&T Byron Nelson, getting one step closer to his goal of becoming the world’s sexiest golfer.

As for Richard Bland, proud Betfred British Masters winner? Once you see him as “older Webb Simpson,” you won’t be able to unsee it. Thanks, Zephyr.

Finally, Lee-Anne Pace took down the Ladies European Tour title at the South African Women’s Open. It was an incredible fourth win for Pace in her home country’s national open.

On the PGA Tour, the Sunday leaderboard featured a bunch of golfers who have been on a bunch of leaderboards of late. Sam Burns, who finished solo second, claimed his fifth 36-hole lead of the season, fully three ahead of anybody else. If only they gave trophies at the halfway mark!

Jordan Spieth, meanwhile, owned the first-round lead and hung around all week. While he called Sunday a disappointing finale, he wound up T9. The result was his seventh top 10 in nine starts, and his stellar ball-striking bodes well for this week in Kiawah.

The European Tour’s leaderboard, on the other hand, was defined by golfers who haven’t spent much time on leaderboards of late. Not just Bland, the unlikely victor, but there was my former pen-pal Eddie Pepperell leading after 36 holes. His T11 was still the best recent result for a British pro who ranked 58th at the beginning of the pandemic and has since plummeted outside the top 200.

And there was Edoardo Molinari, too, the former Ryder Cupper who has become better known in recent years as Francesco’s brother and Matthew Fitzpatrick‘s advisor but hadn’t recorded a top 20 since 2019. He had a legitimate chance to win on Sunday and left frustrated in T8. In this case, frustration means you’re doing something right.

Four LET players, meanwhile, punched their tickets to the U.S. Women’s Open next month at the Olympic Club: Pace and Nicole Garcia will represent South Africa at the USWO, while Germany’s Leonie Harm and Karolin Lampert earned their way, too.

Shoutout to the grounds crew homies.

No Tour pro wants to see a tournament delayed to Monday, but that’s triply true when you’re talking about the Monday of a major championship week. So it was wise of tournament organizers in Dallas to push up tee times on Sunday and do everything in their power to push through the deluge that followed.

For a few minutes midway through the back nine there was a sequence of putt, squeegee, putt, squeegee that was fun but bordered on the absurd. So it was appropriate (if slightly less fun) that play halted due to lightning and stayed halted while the grounds crew tackled the literal rivers suddenly bisecting fairways, per Kira Dixon:

Shoutout to my good people!

At some point soon our collective Back-o-Meters may swing so far in the opposite direction that anything less than a Jordan Spieth victory will feel like a disappointing week. In the meantime, let’s enjoy the magic our Golden Man (formerly Golden Boy) brought this week, which included these three outrageous highlights:

In summary, I will never get tired of these.

Eight is too many.

Last weekend, I set off bright-eyed and bushy-tailed to tackle the best of the Pacific Northwest at the U.S. Open qualifier at Gamble Sands.

I was psyched to be there. First because I’d never been to Gamble, which is not only the most spectacular golf course in remote central Washington but also ranks among our very best public golf courses in the entire country. It’s a fun course, with massive, (mostly) forgiving contours, expansive views and the distinct Wild West sense that you’re playing golf near the end of the Oregon Trail.

Second, I was excited to test my game in competition for the first time in a couple years. I hadn’t played under the gun since a spectacular 2019 trip to Alaska, where I explored the smallest, most dramatic local qualifier in the world. But I actually played more golf this winter in Seattle than I had in previous winters in New York, and I thought my game could hold up for 18 holes at least. If I made a few putts, who knows?

Things didn’t go quite according to plan. There are really only a couple intimidating tee shots at Gamble Sands, but by far the most intimidating is the back tee at the 506-yard opening par-4, where you hit over a whole bunch of scrub with only a small sliver of visible fairway staring back at you.

It’s not actually a narrow landing area, but it becomes much narrower if you hit a thin, nervy push down the line of the right cart path, where nasty bushes lurk. We never found my tee shot. A short-sided bunker shot and a three-putt later, I walked off the first hole with a quadruple-bogey 8. What a welcome back to stroke-play golf!

Conditions were relatively calm and the greens were pure, which meant it would be a shootout. It also meant I was effectively done for.

The rest of the day was a bit strange, since I was almost immediately out of the event but also didn’t want to shoot, say, 90. I didn’t make any more quads, ran off a string of pars, logged a couple more long-range three-putts, finished with a birdie and posted five-over 76.

I have three immediate takeaways from the event.

Now it’s time to find another tournament for redemption…

Back in April I delivered one Masters pick based off the first person I saw “in the wild” in Augusta. As luck would have it, I’d just run across Will Zalatoris stocking up on healthy snacks Sunday night before the biggest tournament of his life. Hopefully you followed us to a nice top-five bet or something of the sort.

I’ve not yet touched down in Kiawah, so I haven’t seen any pros at local establishments. But I’ve pulled out my crystal ball anyway to bring you three predictions:

We’re talking Mac as in Scottish rising star Robert MacIntyre, Canadian stalwart Mackenzie Hughes and American Twitter king Macs (Max) Homa, who has enlisted ultimate X-factor Jim “Bones” Mackay as fill-in caddie this week. Casual golf fans will know the first two as “Who’s that guy on the Masters leaderboard?” but you’ll soon see all three inside the top 10 finishers at the PGA Championship. At 11-1, 28-1 and 10-1, respectively, we’re talking about some more value here. (Go top-20 if you’re actually looking to win this bet…at 5-1, 10-1 and 5-1 we’re still in decent shape there.)

2. Scores will be better than you think.

I haven’t even seen any over/unders on projected winning score, but the early-week narrative will be all about how hard Kiawah Island is. Fade the narrative! Yes, there will be some fun carnage to watch, especially if the wind rips into players’ faces the final five holes. But still — these guys hit it long and they hit it straight. Somebody’s getting to 10 under par.

If you made it all the way to the end of the column you’re rewarded with my pick: Xander Schauffele at 20-1! He’s a big-game hunter who keeps coming up, well, just short of catching the actual big game. I picked him at Augusta National and I may pick him again until he wins a major. I’ll speak it into existence: This is his week.

How will Brooks Koepka feel? How will Dustin Johnson play?

Rory McIlroy still somehow hasn’t won a major since 2014. Jordan Spieth needs this major for the Grand Slam. They’ve each won a Tour event in the last six weeks and they’ll be the two biggest names to watch this week.

It’s a major championship week! We’ve got more streaming than you could possibly imagine! Watch it all. And, of course, follow along on GOLF.com.

Whatever happens, we’ll see you back here next week.