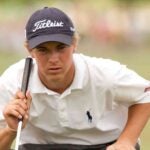 Jordan Spieth at the 2010 Byron Nelson.

Morale is high over here in Rhode Island. I finally got to break in my new clubs over the weekend, the weather is improving each and every day and Tiger is playing in a major this week. What else could a gal ask for?

The world’s best players may have been busy prepping for Southern Hills over the last week, but there was still plenty of action on social media. Here’s what caught my eye.

The Reeds’ gift to DJ and Paulina

I haven’t seen any social media posts hinting at which pros, if any, were in attendance at Dustin Johnson and Paulina Gretzky’s wedding last month. However, Paulina took the time to share some of the wedding gifts they received on Instagram last week, so let’s take a look.

First up we have this custom light-up sign for the Johnsons. Paulina’s brother, Tyler, and his wife, Sara, gifted it to the newlyweds.

Nice! A wedding gift from family. No surprise here. On to the next gift, which is from none other than Justine and Patrick Reed.

I’m not going to lie, folks. This gift caught me off guard. No interviews, Getty Images or social posts up to this point have even so much as hinted at a friendship between DJ and Reed. Yet here Reed is, gifting a $3,500 baccarat bar set to a fellow PGA Tour player. Reed and DJ have been on a handful of Ryder Cup and Presidents Cup teams together, so it’s possible they became pals through those events. We all know that Justin Thomas is pals with Tiger and Spieth, but now I’m curious about the lesser-known friendships on Tour.

Phil’s liked (and then unliked) tweets

Phil Mickelson may not be tweeting these days, but the man is definitely online. The kids might go so far as to say he is “lurking.” After reading that Lefty had liked a tweet from Clay Travis last week, I headed over to the reigning PGA champion’s Twitter page to see his likes for myself. At that point, Mickelson had “unliked” said Tweet from Travis, but had liked a new one, which I have linked below.

The crazy thing about social media is that you don’t even have to write anything to passively make a statement. Simply “liking” a Tweet gives fans and followers something to read into, which is exactly what people did here. Did Mickelson like these posts hoping people would notice? Was it a way to show the golf world that he’s keeping up with all the LIV news even though he’s not playing competitively? I guess only Phil himself really knows.

Back when I was in high school, people got very creative with how they asked their date to the big dance. Simply asking someone to go with you would not do. I remember some guys made signs, others wrote “prom?” on a cake, and one kid even got the jumbotron at Fenway Park involved. It was almost competitive, so I totally understand what Spieth was going for here.

What better way to ask a girl to prom than on your local news channel?

Never mind the fact that Spieth was playing in a PGA Tour event as a 16 year old. Do you know how much clout this prom proposal must’ve given him around the neighborhood and in school? I’m willing to bet this set the bar insanely high for the rest of the guys trying to think of a clever way to ask their crush to prom. You can watch the full video here.

Speaking of high school, if you’re heading to Southern Hills this week, you may need to get creative with your alcohol consumption this week. Channel the energy you once had when you’d confidently sneak a handle of cheap vodka into your friend’s house, because you might find yourself in credit card debt if you buy more than two drinks at the PGA Championship. (Disclaimer: I am not actually suggesting you sneak anything into Southern Hills. Maybe schedule a pregame with your pals before the gates open at 6:30 a.m.)

Steve Stricker has come a long way since a medical scare almost took his life in the fall. The U.S. Ryder Cup captain won the Regions Tradition, a PGA Tour Champions major, by six shots on Sunday. And in classic Stricker fashion, the whole family was involved in the celebrations.

Congrats to the Stricker family! And happy PGA week to all who celebrate.