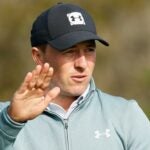 "It's still important to shut off the noise and free yourself up," Jordan Spieth says. "Just be a kid out there playing."

ORLANDO — For a game that invented its own version of sotto vocce — the “golf whisper” — it’s amazing how much screaming golf produces these days.

That would be Michael Greller, the only caddie he has ever had as a pro.

That would be Cameron McCormick, the only swing coach Spieth has ever had.

The grip he has used to break 70 ten thousand times, going back to his early days as a junior-golf prodigy in Dallas.

He’s gotta practice less, practice more, get a different driver, a different putter, move to South Florida, play more with JT, get off the PGA Tour Policy Board, get off Twitter, play more, play less, find a shrink. He’s got to…

So much outside noise directed at the dude. (That is, if a married, broad-shouldered, first-born 27-year-old with a receding hair line and a wise head underneath it can be called a dude.) So much noise directed at a golfer — many would say the most likable player on Tour today — whose game is rooted in artistry, in flair, in the internal conversation he shares so willingly. In the music in his head. That’s our Jordan, in fat times and lean ones.

In a press conference on Wednesday morning, before his pro-am round in his first Arnold Palmer Invitational, Spieth was asked how he handles all that noise. Because he’s one of the great talkers in the game today (in the tradition of Lee Trevino and Colin Montgomerie and Padraig Harrington), here’s what he said, slightly edited but largely in full:

“I think I’ve done a little bit of everything. I’ve probably let [the noise] in at times more than I should. I think it’s just part of kind of growing up out here. I feel confident at where I’m at now. I feel really good about plans going forward. I feel good about how to handle some of that extra noise. It’s kind of hard to prepare for it at 21, 22, 23 years old. And not that it’s easier at 27. But it’s almost like when you’re in contention quite a few times, you start to get a little more comfortable in that situation.

“When you get good or bad banter, or noise, enough times, you start to be like, ‘All right, this is just what’s going to happen. So my approach is to stay grounded, move forward and set goals. And really just trust your team. And have that be the noise that you listen to. So I feel good about that.

“I mean, 90 percent of it is good. And I love the crowd support that I receive at events. But I think it’s still important to shut off the noise — block the noise as much as possible — and free yourself up. Just be a kid out there playing, you know? You didn’t have any of that noise when you were 14, 15, 16 years old, learning to fall in love with the game. So just try and be that kid as often as possible.”

Quick interlude: When Spieth was brought into the press conference, he was introduced as a player coming off three straight top-15 finishes. Which is of course true. He finished fourth in Phoenix, third a Pebble Beach, 15th at Riviera. The only reason he didn’t play in the WGC event last week in Bradenton was because he didn’t qualify for it. So, three top-15 finishes in his last three starts. Oh, he’s won three major titles, too. The 2015 Masters and U.S. Open and the 2017 British Open.

So, he was asked, what do you actually do to block out the noise and the chatter.

“You can, you just have to, actively block it out,” he said. “Avoid going to places where there’s noise. When you’re at tournaments or you’re asked questions in an interview room, or there are crowds yelling stuff, then it’s unavoidable. And I’m talking good and bad. Because the more you let your head get blown up, the more hits you will take as well. Versus just remaining as neutral as possible, and understanding that stuff’s going to come in from every which way, and just learning how to be very level-headed and almost non-reactive to things.

“I have certainly sought help about this, and talked to a lot of guys about it. But you kind of have to learn how to do it your own way too.”

Yikes, this game is complicated, even more so when played under a microscope. But really, so is trying to do any difficult thing that requires some unusual blend of physical and mental abilities, with the public watching you and judging you.

Whoever came up with the concept of the 72-hole, four-day golf tournament, where you start with 144 or so golfers and whittle your way down to one winner, had to be some kind of genius. Ninety holes would be too long. It would be hard to sustain interest. Fifty-four holes would be too short. It would produce more fluky winners. What Spieth is discovering this year, or rediscovering, is that there’s a marathon between 54 holes and 63 holes and 70 holes and 72.

Maybe you saw Sam Burns at Riviera, on Sunday. When Tiger came on the broadcast, Burns was starting the final nine holes of the Genesis Invitational. Woods was (now famously) talking to Jim Nantz of CBS, and Burns was looking like he could cruise on home and win the thing. But he played the final nine in 38 and finished a shot out of the playoff.

Life on the PGA Tour. Bunch of animals on it. You stop to admire the flowers and they will stomp all over you.

Spieth’s last win was in July 2017, at Royal Birkdale. One of the most entertaining Open Championships ever. But on Wednesday afternoon, he was on the leaderboard. Of the API pro-am. Spieth was playing with three affable gents. A white-bearded man enjoying refreshments and contributing now and again. A young, fit guy who could absolutely bomb it, as young fit guys do these days. And a middle-aged man with a pink shirt and white pants with Arnold’s colorful umbrella logo sewed all over them. If you’ve watched pro-am golf before you’ve seen these three men.

Spieth was wonderful with them and they were terrific with Spieth. They shared chocolate-chip cookies, offered by one homeowner. They did some friendly closest-to-the-pin wagering, $20 bets that were never paid. They oohed when Spieth hit a draw 6-iron into a slice wind from 206 yards that was so beautiful it could have left you in tears. The caddies were wearing matching Arnold Palmer shirts and Arnold Palmer hats. It was a good time.

The group of eight got to 18. A scoreboard showed that they were 14 under par and in a tie for the lead with another team. (With handicap strokes, pro-am scores get crazy low.) The last hole at Bay Hill is a 500-yard par-4 with a lake in front of the green and on Wednesday it was playing into a slice wind.

“OK, Jordan, we need a birdie here,” the man with the white beard said.

“Five-oh-five, into the wind,” Spieth said, talking to himself.

He’s famous for that, talking to himself. As for people talking at him, we’ve covered that.

A pro-am round is really a glorified practice round for the players. Except when it’s not. Spieth, on the last hole of the day, was about to play his first shot of the day with a little extra meaning.

He hit a lousy drive, a high push that the slice wind took even further right.

“Jordan!” he said to himself.

Spieth made a 25-footer on the par-5 6th for a bogey, after driving it in the water, a toe-pull that was wet from the get-go. A reload. When his ball went in the hole he flipped his putter in the air, in that weird mix of jubilation and disgust that golf produces so routinely. In layman’s terms, he made a birdie on his second ball.

“Once it’s done, it’s done, you can’t go back, so you’ve got to move forward,” Spieth said, explaining his attitude over his third, fourth, fifth and sixth shots on the hole. His attitude in general, really.

Spieth was in a tie for 15th at the end of the day. When 72 holes are in the books, will this be his fourth top-15 or better in his last four starts? Chances are good. Will this be the week he wins for the first time since 2017? Chances are not very good. Not that you can know. You can’t. That’s why they play. That’s why we watch.

When the pro-am round was done, there were fist bumps all around and the man with the pink shirt and the umbrella pants stood in the middle of the green. He looked around and broke into song. He was singing Puccini. This was not opera night at your favorite Italian restaurant. The man was Fernando Varela, a tenor who has performed all over the world — once in front of 65,000 people in India — and is a member at Bay Hill. Spieth stood at the side of the green and listened appreciatively. Nobody was crying but it was a beautiful and unexpected, to say the least.

Varela said later he has played in a handful of pro-ams but never with a pro who was as engaged with his amateur partners as Spieth was. He also said he knows what it’s like, to be 1 percent off your best, and how difficult it can be to get that 1 percent back. “It can get to be a job,” he said. “The hardest and most important thing is to hold on to your love for the thing you had when you were young.” He and Spieth speak the same language.

The pro-am round had been over for about 15 minutes by now. The ams were lingering. Spieth had said his goodbyes.

Spieth didn’t, by the way, split with Greller or McCormick. He didn’t move to Florida or get off Twitter or the Tour policy board. He’s trying to block out the noise but knows it’s easier said than done.

Anyway, it was a gorgeous March night in central Florida. Spieth had hit a bunch of quality shots in that pro-am, and a bad drive on the last. He went to the range, Greller beside him, got out the driver and started hitting drives, one after another, into a slice wind, now, though, with nothing on the line, except the promise of improvement.