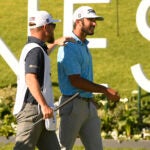 Nothing about the final day at Riviera was easy, but Max Homa was the champion after a two-hole playoff victory against Tony Finau.

Max Homa had 40 inches left between him and a victory at the Genesis Invitational Sunday afternoon. Twenty minutes later he was the underdog in a playoff with his ball resting next to the base of a tree. Twenty minutes after that, he was somehow a PGA Tour champion again.

It was a true rollercoaster ride Sunday at Riviera Country Club, ending in a victory for Homa and yet another second place finish for Tony Finau. After missing a 3-footer for the win in regulation, Homa — who was raised in the Los Angeles area — made a pair of pars on the 10th and 14th during a two-hole playoff for his second career Tour win. It’s difficult to say which moment of the final hour was the most surprising.

There was Homa’s up-and-down to a near-sided hole on 17 for birdie. Then the dart of an approach into the tucked pin on 18, followed by the missed shorty. The biggest stunner was likely Homa’s pitch from next to a tree on the par-4 10th. Without a clear path to swing, he was forced to hood the head of his 60-degree wedge and flip it at impact, skirting his ball up onto the edge of the green.

“Tremendous,” was Frank Nobilo’s gut reaction. It really was.

But even that wasn’t quite good enough in the moment as Finau had just 7.5 feet remaining for a tournament-winning birdie. His putt came up short and onward to 14 they went.

Homa’s ensuing approach to 12 feet set up a ho-hum but winning par as Finau pushed his par-saver right of the cup. “I’ve been watching this tournament my whole life,” Homa said during an emotional interview that followed. “It’s why I fell in love with golf. Tiger [Woods] is another reason why I’m into golf. Had good feelings this week. Been playing great. City of Champions, you know? Dodgers, Lakers, me now. It’s a weird feeling.”

Every player’s day began brutally early Sunday morning as the third round still needed completing. After waking up at 4 a.m. local time, Sam Burns was the man out front and alone after 54 holes, two clear of Homa, Dustin Johnson and Matthew Fitzpatrick. Burns was still two clear of the field after 63 holes when he went out in 31 on the front nine. But lackluster tee shots on the 12th, 14th and 15th bled into bogeys as Finau and Homa each reached 12 under.

Finau, one group ahead, got up-and-down on 18 for a 64, posting the 12 under mark and waiting for Homa to beat it, which appeared extremely likely after Homa stuck his approach to just 40 inches. The ensuing putt somehow begged its way out of the hole.

“Obviously, it wasn’t a very good putt,” Homa said to reporters afterward. “It broke more than I would have liked it to for a 3- or 4-footer. I was just a little nervous, honestly. This tournament means a lot to me. I was a little shaky. Didn’t hit a good putt. It was kind of the first one all day I didn’t hit well.”

He’s not wrong. Homa didn’t make a bogey all day long, inclusive of the handful of holes he had to play after restarting the third round early Sunday morning. His final round 66 was only bested by Finau’s 64, which included a bogey, oddly enough.

“It’s a little bittersweet right now, but I played great,” Finau said. He has now amassed 12 worldwide top-5 finishes in the last two years, but no victories. “I did what I needed to do. I felt like coming down the stretch in regulation I had a chance to win there in the first playoff hole, about a 10, 12-footer and didn’t make it. But I knew I was playing good golf coming in and I was just happy to have a chance.”

The win for Homa means a massive jump in the world golf ranking, up to No. 38 in the world, a career-high. His vaulting into the top 50 now means new plans for next week, too. Homa’s final round booked him as the final qualifier for this week’s WGC-Workday Championship at Concession Club in Florida.

There may not be fans at the Olympics, but there's plenty of support

A Masters rematch! Here's everything you missed in Round 3 of the Olympics