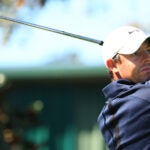 Rory McIlroy hits his tee shot on Thursday on the 2nd hole at Bay Hill.

One of the co-leaders said earlier this week he would always play the Arnold Palmer Invitational. You would, too. Since 2015, he’s finished 11th, 27th, fourth, first, sixth and fifth — and shot a six under 66 on Thursday. Here are three things you need to know after Thursday’s first round at Bay Hill in Orlando, Fla.

Rory McIlroy, through 10 holes, was one under. Over his next five, he was five under.

“The first few holes were a little slow going and I made a really good birdie on 14 and that sort of got me, got the round going,” McIlroy said. “The two twos on the back nine were great. Coming off last week where I really struggled on the par-3s, and today I played them in three-under par, so quite a turnaround.

“But, yeah, I played well after that and hit some really good shots, some good drives, I saw a lot of really positive signs out there today, which was, which is really encouraging.”

Conners bogeyed 9 and 18 — and had six birdies and an eagle.

“I did a lot of things really well today and hit a lot of really nice shots and was able to hole some nice putts, so definitely a high grade for today’s round,” Conners said.

Bryson DeChambeau is a stroke back

Bryson DeChambeau is a stroke back — and may have had one of the more disappointing birdies you can make.

On the 528-yard, par-5 6th, DeChambeau hit his tee shot 309 yards down the left side of the fairway, got home in two and two-putted. But he had earlier told GOLF.com that he had planned to take a direct line at the green on the hole that doglegs around a lake — a carry of about 350 yards of the water in front of the tee — only to take the conventional play.

“There was a high expectation level of me trying to go for the green there and it was a little pressure that I wasn’t expecting,” DeChambeau said. “But, no, it was fun. The crowds were great with it. I pulled out an iron as a joke off the tee box. And for me it was just too much off of the right and more into the wind than anything.”

Two strokes behind the leaders were Byeong Hun An, Jason Kokrak and Sebastian Munoz, and eight players were three back, including Viktor Hovland.

Jordan Spieth is four back