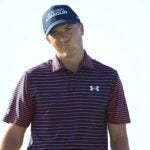 His expressiveness is among Jordan Spieth's best qualities.

Through three rounds in this 149th British Open at Royal St. George’s — “quirky” RSG! — Jordan Spieth is three shots behind the frontrunner, King Louie. (Take me to your leader.) Spieth is not out of it, despite his bogey-bogey finish in the golden sunshine of coastal England on a summer eve. The TV shots were spectacular. But it was not a peaceful night, not in Spiethworld.

You do know that the Jordan Spieth theme song is off the Ringo playlist, right?

To the tune of It Don’t Come Easy:

Jordo never makes it easy,
‘specially when it’s breezy
And why Tiger don’t call him Spiethy?

Gotta get this one thing off the chest, because the thought here is that it’s all part of the whole Spieth renewal program. When Tiger Woods was the captain of the 2019 Presidents Cup team, Spieth was, no doubt, struggling. But he was still Jordan Spieth, winner of three majors by age 23. Did Tiger show the Texan any love, when he was looking at his captain’s picks that year? He did not.

Maybe Tiger did Spieth a favor. At the end of the day, in golf, you’re on your own, no matter how often you use the word we.

And we type that with all due respect to Spieth’s considerable we: his caddie, his coach, his sticks, his parents and siblings and wife, his intensely loyal fanbase. Talk about staying the course. Spieth made no wholesale changes. He just kept at it. There were range sessions when he looked crazily out of it. That is, to an outsider.

Spieth makes more longish putts than anybody. Seems like it’s a highlight reel of 22-footers, every time he breaks 70. But the par putt on 18 on Saturday was more memorable, for all the wrong reasons. From two feet, his ball didn’t even touch the hole.

The next thing you saw on the telecast was Spieth shaking hands with his playing partner, Dylan Frittelli, and running off the home green. His putt for bogey was longer than his putt for par. That’s never good.

Spieth was checking his phone as he was climbing the steps after leaving the 18th green — you wonder what he was looking for — and he went straight to the practice putting green.

If Spieth doesn’t get help from the two players ahead of him, Louis Oosthuizen and Collin Morikawa, he can’t win. But if he does, he can. Yes, Spieth, winner of your 2021 Texas Open, ancient Tour event, is in contention to win his fourth Grand Slam title, after his wins in the 2015 Masters, the 2015 U.S. Open and the 2017 British Open.

He likes odd courses. He won his U.S. Open at Chambers Bay, he might have been the only player to like the course. He was the 2012 low am at Olympic, his favorite U.S. Open course. Try finding another elite player who would say that. (All those fade shots off hook lies. Awkward!) Under cones of silence, players will tell you that Augusta National, where Spieth won the Masters in 2015, is loaded with ridiculous moments. The first green. The fairway bunkers on 5. The tee shot on 11. Etc. Well, Spieth loves it.

Birkdale, where he won the Open in ’17, is a sane course, but not the way Spieth played it in the final round. Spieth was choking away a fourth-round lead until he went wildly off the rails on 13. But there, from the driving range, he managed to make a bogey, he walked off the green trailing for the first time all day and that was where he righted his ship.

The point is, you don’t know what Sunday at Royal St. George’s is going to bring.

In the meantime, he’s talking to his ball, to himself, to his caddie. He’s looking mad after good shots and he was smiling on the putting green Sunday night in Sandwich. You’ll never figure out this Jordan Spieth.

“There are just a lot of external factors over here and I think that external is where I need to be living,” Spieth said earlier this week.

What does that even mean?

It means Spieth is having himself a good time at “quirky” RSG.