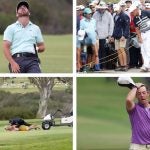 The U.S. Open turned to chaos on the back nine.

LA JOLLA, Calif. — There was a moment on Sunday afternoon where the U.S. Open leaderboard went platinum. Sixty-something holes at Torrey Pines had sifted out the pretenders and left San Diego’s eager spectators with the who’s who of the golf world atop the leaderboard. At one point, 10 players were within a shot of the lead — and a fantastic back-nine shootout was sure to determine the champion.

But then mayhem broke out instead. The tournament went mental. Bad breaks and bad shots and long rough and a long week and a looming $2.25 million check combined for a cocktail of consternation. After three-and-a-half rounds of relatively uneventful golf, the fellas packed in a week’s worth of weirdness into the final couple hours. If you watch golf only for the birdies, this wasn’t your afternoon. But if you’re into pain and chaos, well, you’d found the right channel.

None of the above applies to Jon Rahm, of course, who played his final 15 holes bogey-free to hoist the trophy. The U.S. Open provides many rakes on which one can step, and Rahm deserves all the credit for dodging them. The eventual runner-up, Louis Oosthuizen, missed most of the mayhem, too. As for the others? Yes, let’s get to the others.

Let’s begin with Rory McIlroy, whose day was going swimmingly through 10 holes. He’d missed a couple short birdie tries but had stayed patient and sat four under through 10 holes, one shot out of the lead. He even succeeded in finding the middle of the 11th green, a lengthy par-3 into the wind, before things took a turn.

McIlroy’s first putt seemed to bobble off the face and came to a stop some four feet short. His next putt missed left. Bogey. No worries, though: McIlroy had birdied No. 12 each of the first three days.

But it would not be four in a row. McIlroy found a fairway bunker, then a gnarly lie in a greenside bunker, then a nasty lie in the rough, from which point he hacked out to eight feet and missed the putt. His hopes of ending a seven-year major drought vanished in just one commercial break.

“I just said a little while ago the cream’s risen to the top, but it looks to me like it just soured,” said NBC’s Paul Azinger as McIlroy’s bogey try slid by the hole.

A moment later, as McIlroy and playing partner Russell Henley made their way to the 13th tee, there was some commotion on the fairway ahead: A man wearing orange shorts and a rainbow flag was jogging down the hole wielding a golf club. He dropped two balls on the fairway, hit one into the ravine, did a dance for the crowd, hit another one into the ravine, dropped the club, air-dribbled a basketball, pump-faked an officer, sprinted away and then ran into a rough tackle courtesy of an officer on a golf cart.

McIlroy saw that particular brand of action unfold from behind. Up ahead, Bryson DeChambeau was contemplating his third shot on No. 13. He’d held the tournament lead on the 11th tee before making bogey on the next two holes and slipping out of a drive on what would have been the reachable par-5 13th. From there he laid up into the rough and then, as the flag-bearing fan was placed into handcuffs, slashed at another ball from the rough en route to an eventual double-bogey 7. The U.S. Open had even undone its defending champion.

DeChambeau added insult to insult at No. 17, where his drive found the ravine and he shank-bladed a greenside chip en route to quadruple-bogey 8. He shot eight-over 44 coming home and went from T1 to T26.

Want more? We’ve got more. Mackenzie Hughes began the day tied for the lead and was still very much in the mix as he played No. 11, a lengthy par-3 into the wind. In the mix, that is, until he pull-hooked a 5-iron that landed — and stayed — in a tree some 40 yards left of the hole. Fans chanted “climb that tree!” A swarm of rules officials descended. Hughes did not climb the tree. He took a drop. He made double bogey. That was that.

“I mean, it’s like one-in-a-million break,” Hughes said after his round. “I’ve played golf my entire life, I’ve never had a ball stuck in a tree,” he said.

Brooks Koepka was clambering up the leaderboard and poised to take the solo clubhouse lead if he could just make a birdie at the short par-5 18th. But his second shot finished in the lettuce right of the green. From there he tried to pull off a high flop shot but dumped it in the bunker just in front of him instead. He couldn’t get that up-and-down either and settled for a finishing bogey and a share of fourth.

There was more! Collin Morikawa was in prime position at four under until he bladed a chip over the green at No. 13, leading to double. He finished two under. Paul Casey made it to three under before requiring a bunker shot and three putts to get in for double-bogey six at No. 12. Matthew Wolff was three under before reeling off five bogeys in six holes around the turn. And Scottie Scheffler hit his approach shot so far left on No. 18 that it went over the grandstand and settled in a mesh fence some 25 feet off the ground. The goods just kept coming.

The top 10 at the end of the day had very little in common with the 10 from three hours before. Harris English was at even par with five holes to play; he finished solo third. Guido Migliozzi began the day T21; he finished T4. There was so much late carnage in the final pairings it was hard to keep track.

Check out the back nine scores — on a par 36 with two par-5s — from the final five pairings:

That 34 belonged to Jon Rahm. The 36 belonged to Louis Oosthuizen. The over-par scores belonged to golfers whose days didn’t finish up quite how they envisioned.

What can we learn about what we saw? Several contenders said they’d finally seemed to catch the worst luck in San Diego County.

“I can’t tell you how many times I hit shots this week into bad lies and good lies, and they played out 50-50 this week. I caught the bad lies in the back nine today,” DeChambeau said.

“I felt like I was actually hitting it pretty good and just got a lot of really bad breaks,” Wolff said.

“It’s the U.S. Open. Sometimes you need things to go your way, and they just did not,” Xander Schauffele said.

At the end of every tournament, one golfer wins. Another 155 don’t. Often they play well but don’t make enough birdies. But this is U.S. Open week, which means those 155 just ran out of survival juice a little bit early. That doesn’t mean the rest of the field are losers, though. In fact, let’s hand the mic to one such non-loser, Guido Migliozzi, to finish the day. He didn’t see any streakers or shank any chips or stick his ball in any trees. But he beat a whole bunch of golfers who did.

“It’s a monster course,” he said after his round, grinning with satisfaction. “Even under pressure, I’m performing well. I’m happy, and I can’t wait to play another tournament.”