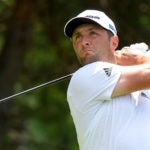 The leader did not miss on the back nine. One of the second-round leaders missed a few times. Two hours saw an eight-shot swing between the two. Here are three things you should know after the third round of the Memorial, the second of back-to-back events at Muirfield in Dublin, Ohio.

“I hit great tee shots on 13, 14, 15 that set up opportunities for birdie, and then after a couple of really good wedge shots, a great flop shot on 15 and a lucky putt on 16, well, I’m fortunate to be ahead,” Rahm said.

On the par-3 12, Finau hit four shots around the green. His first shot, and second overall, went about 3 yards after being caught in a poor lie near the right greenside bunker. The next shot nearly went off the green. He two-putted from there.

On 14, Finau knocked it into the water and bogeyed. On 17, he hit another shot about 3 yards after again being caught in a poor lie near a bunker and double-bogeyed the hole. He finished with a 1-over 73.

“Yeah, it was good, and then it wasn’t good,” Finau said. “Ran into some speed bumps on the back nine. Man, this golf course can get you in a heartbeat. You just try and put your best foot forward every hole, every shot and try and play as well as you can. The greens are firm. There’s enough wind up there to think about. They’re fast. A little disappointed in my finish, but look, I’m in a good position going into tomorrow, and it’s going to be tough tomorrow.”

Palmer was 1-under for his round before bogeying 16 and 18 for a 1-over 73. Finau and Palmer are the only two players within six shots of Rahm – Danny Willett is six back, and Jason Day and Henrik Norlander are seven back.

How did Tiger Woods do?

Tiger Woods barely made the cut. He could make the top 25.

Woods, playing his first tournament since mid-February due to ailment and the PGA Tour’s three-month hiatus due to the coronavirus, had four birdies on his way to a 1-under 71. It repeats his first-round score. It also follows a 4-over 76 that had him close to missing the cut for the first time in his 18 starts at the Memorial.

Woods is now three shots from the top 25.