Tiger Woods shoots 1-under, but a colorful description is the highlight 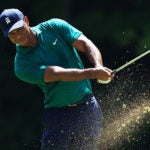 Tiger Woods was 11 strokes off the lead during Saturday’s third round of the Memorial. He had teed off 5 hours and 50 minutes before the leaders. He was a pedestrian one under through six holes at Muirfield Village Golf Club.

He swore at himself after a poor third shot on the par-5 7th hole.

The Memorial may as well be the Masters. On Friday, Woods was asked how he would describe a grinder. “I think that anyone who fights all day, I think that’s the guys that have typically been grinders, guys that don’t ever want to make bogeys,” he said. He was asked too if he considers himself one. “Always have,” the 15-time major winner said. The grinder was grinding.

On No. 7, he hit his tee shot into a right fairway bunker. He hit his second shot out, turning away before it landed 120 yards away. He hit his third shot, from 141 yards out, left and long. He would need to two-putt for a par. Grinders don’t ever want to make bogeys.

“Nooooooo, you … jacka–,” Woods said, bending his knees at “nooooooo” for emphasis.

His putt rolled within a half-foot, and he tapped in for a par.

Woods, who had not played in a tournament since mid-February due to ailment and the PGA Tour’s three-month hiatus due to the coronavirus, shot even-par from the 7th hole on and finished with a one-under 71. It followed a first-round 71. It also followed a second-round 76 that had him close to missing the cut for the first time in his 18 starts at the Memorial.

The grinder was grinding.

“I think that getting back into the flow and competing again and playing at this level, I hadn’t done that in a while,” Woods said when asked what he’s learned after three rounds back. “Playing home and playing out here is so very different, and making sure that I stay sharp and don’t make any silly mistakes and dump the ball in the wrong spots or give myself bad angles, that’s one of the things about playing competitive golf that’s very different from playing at home.”