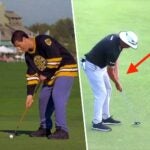 Joel Dahmen is hoping the same putting style that led Happy Gilmore to the 1996 Tour Championship might help him in Mayakoba.

Before Saturday’s round at the Mayakoba Golf Classic, Joel Dahmen was messing around on the putting green. It’s an appropriate event for messing around before the round. Mayakoba is where the good times (and good putts) roll, as it’s the last full-field Tour event of the year and it’s held at a breathtaking resort in the Riviera Maya. Tour pros ride bicycles to the clubhouse to make their tee times.

Dahmen is famously chill no matter the venue, and extra-chill in Cancun. That’s why, as he warmed up for his Saturday tee time — in the second-to-last group, mind you — he was putting like Happy Gilmore. You know the look: Left hand high, right hand low, like he’s gripping a hockey stick.

It worked for Happy Gilmore at the 1996 Tour Championship. Who’s to say it couldn’t work for Dahmen? But it’s one thing to mess around on the driving range (like Dahmen did before the first round, when he warmed up left-handed) or the practice green; actually incorporating it into tournament play is a different animal.

But Dahmen isn’t most Tour players. His caddie Geno Bonnalie, who relates various stories of mischief via Twitter, described what happened next. At No. 17, coming off back-to-back bogeys, Dahmen decided to change things up and went with the split-grip Gilmore approach.

Success! He holed his birdie putt. On No. 18, he hit his approach shot close again. In golf, it’s always good to ride the hot hand, so Dahmen went full Happy again, sliding that right hand down the putter shaft. His ball toppled ever-so-gently over the edge of the cup and in for another birdie 3.

The putt finished off a third-round 68 for Dahmen, who sits T11 heading to Sunday’s final round, six shots off the lead of Emiliano Grillo.

“I might do that in front of Captain Stricker tomorrow,” Dahmen told GOLF.com, referring to his final-round playing partner, who just so happens to be the U.S. Ryder Cup captain. “Been practicing with it. It’s solid.”

Did he mean it? With Dahmen, the line between joking and serious is particularly blurry.

“I honestly have no idea,” Bonnalie wrote on Twitter, asked whether Dahmen will go split-grip again.

Dahmen posed a question of his own: “Hey @stevestricker how many putts do I need to make tomorrow to possibly get a nod for the Ryder Cup?” he asked.

“Question is, can the Happy Gilmore putting stroke hold up under @rydercup pressure??” Stricker responded.

“Well I just got nervous,” Dahmen wrote back. He currently ranks No. 25 in Ryder Cup qualifying points, so maybe a little face time with the captain will help his cause.

Although he’s proven a steady all-around player, Dahmen has never ranked inside the top 100 in strokes gained putting. Still, he’s proven plenty entertaining on the greens. There was this particularly epic walk-in par:

Then there was his Gladiator-style celebration after a made putt at the Zozo:

In other words, we don’t know quite what to expect from Dahmen come Sunday. But there’s a good chance it’ll be highly entertaining.