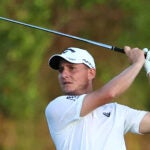 Emiliano Grillo hits a shot on the 16th hole at El Camaleon Golf Club on Friday.

The leader tapped in his par putt on the 18th hole in near darkness. The start of the second round of the Mayakoba Golf Classic had been delayed due to inclement weather on Friday, and a handful of players will finish on Saturday morning. The leader didn’t need much light for his round. He was finding fairways, greens and cups all day long. Here are three things you need to know after play at El Camaleon Golf Club in Playa del Carmen, Mexico.

Grillo shot an eight-under 63 for a 13-under total and a four-stroke lead over Tony Finau and Tom Hoge, and a five-shot lead over first-round leader Russell Knox.

“Everything worked today,” Grillo said. “Played from the fairway, hit it close and when it wasn’t too close, I made putts. It was one of those days.”

Tony Finau is in second

Brooks Koepka shot even-par 71 in each of his two rounds and was expected to miss the cut by a stroke, as was Rickie Fowler.

Among other players, Justin Thomas is 10 strokes behind Grillo.