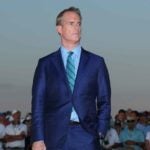 After a five-year run, Joe Buck will no longer be the voice of the U.S. Open.

It was the best of times.

It flat-out was. We — your friends at Fox Sports — had just finished the U.S. Open at Pebble Beach and millions of people across the world saw it. It was Father’s Day. I’m a broadcaster. My late father was a broadcaster. The winner was Gary Woodland, a stud (can you still use that word?), a friend to many on Tour (myself included), a human being, a husband, a father. Gary’s papa is, as am I, a proud son of the Midwest.

I could see Mr. Woodland from across the room, which was packed with revelers. As the silver, lidded winner’s trophy made the rounds, we were all sneaking peeks at it, the celebrity in our midst. A happy room, with happy people in it. I believe Jordan Spieth had a second beer.

The future was blinding. In a year — June, 2020 — we would be at Winged Foot. Twelve moons after that, we would gather at Torrey Pines, where Tiger performed various magic tricks at the last Open there. Then to The Country Club, in Brookline, Mass., in ’22. (Note to self: Confirm that Ouimet ends in a hard t.) Then Los Angeles C.C. in three. Bring in Sheryl Crow: This ain’t no disco. It ain’t no country club either. This is L.A. No, this is the venue for the national open!

Way back in 2019, the only Corona I knew about was beer with a lime in it. There were no discussions for the broadcast rights for the 14 great USGA national championships to leave Fox and head back whence they came, not that I knew about anyway.

At no point during the four-day championship that year (do not say tournament!) did the Pebble greens look like overcooked broccoli. (Who can forget the Chambers Bay greens in 2015?)

There was no nutty two-hour stretch when we did a broadcast without knowing the score of the game, as had been the case at Oakmont on Sunday in 2016, when Dustin Johnson made a score under review on the 5th hole, owing to a wobblyballgate.

And let’s not forget that sweet moment after Brooks Koepka won the 2017 U.S. Open at Erin Hills and some clown in the booth, doing play-by-play on the victory hug, got his old GF mixed up with his current one. Well, Brad Faxon, got that straightened out right away. (Thank you, brother.) Fax lives the game — clearly all parts of the game. Still, not an ideal way to end the show.

Then to Shinny for the ’18 Open. It does not get better than Shinnecock Hills, right? But on Saturday, on the 13th green, Phil Mickelson, everybody’s favorite lefthander, started playing hockey with his golf ball, and my phone started blowing up with: they lost the green, there’s no grass on it; the green is fine and it’s the same for everybody; Phil should be thrown out of the tournament (get your terms right, people!); Phil just did what we all want to do; the USGA needs to apologize for the hole location, etc.; the USGA has nothing to apologize for and needs to tell the players to stop acting like babies. On and on and on.

We left there thinking that one of these years everything would go just great and we would not get killed in the Twitterverse. At least, that’s what I was thinking.

And then came our fifth U.S. Open at Pebble Beach. There is a God!! It was wonderful. And afterward we gathered in the Tap Room. My two daughters. My wife. Gary Woodland and his new trophy and his dad and Woodland family members. Jordan Spieth and Brad Faxon and various fans and USGA people and assorted others. Everybody happy.

Now, 13 months later, I see it for what it was: our closing exclamation mark.

People are writing me condolence notes. Sorry for your loss. I would have LOVED to keep doing it. I am OBSESSED with golf. I play as much as I can with or without our 2-year-old twin boys at home. We, at Fox, would have continued to get better and better at broadcasting golf. But I wouldn’t trade our five-year run for anything, because of the people I worked with (starting with our producer, Mark Loomis), what we experienced together, what we learned. Here are some quick lessons: Let the players and caddies talk. Less is more. From the field is better than from the booth. And the Fox Sports production-side innovations will become a big part of TV coverage elsewhere. Drone shots and more ball-tracers already are.

Broadcasting golf is not like broadcasting baseball or football. You see the ball and the action through your own eyes. The story is unfolding in front of you. In golf, the story is unfolding here and there and everywhere. As the guy in the broadcast tower, you’re getting it all on screens and from reporters in the field. It’s a tricky business. And we were basically doing one PGA Tour event a year, and one LPGA event a year. (The fabulous U.S. Women’s Open, where I worked with the fabulous Juli Inkster. You want her beside you in a broadcast booth, at your member-guest, at a ballgame.) One of our basic challenges is that we weren’t getting that many reps, to use a Tigerism. That’s not an excuse. But it is a starting point.

Regarding Tiger: We never got to see THE MAN do his thing. (MC, DNP, DNP, MC, T21 in our five years.) And that kills me. I did get to interview him once, on a ramp near the press tent, in ’15 at Chambers Bay. We were surrounded by scores of other reporters, looking for tidbits from him, which are few and far between. When returned to the tower, my in-the-booth guy, Steve Horn, who tries to make me look smart, wanted to know about Tiger’s hands. He’s always interested in people’s hands. I saw them up close: the hands of a concert pianist. The skinniest hands you ever saw.

Four days later, I was interviewing the winner, 21-year-old Jordan Spieth. The kid as man and the man as kid. I could feel the depth of his mixed emotions. The joy of winning his national championship, the pain he felt for Dustin Johnson, who had a putt to win, a putt to get in a playoff and, in the end, a putt to finish one shot back.

So many great people in golf! Jim Nantz, coming into our booth at Pebble, strolling in from his house. David Fay, former USGA man and our rules expert. Paul Azinger. So much golf spirit in him, so much insight into what the player is enduring. (And he won’t miss a beat here. He’ll be at Winged Foot for NBC Sports, sitting alongside Dan Hicks, a Winged Foot member and a pro’s pro.) Curtis Strange, who prowls those U.S. Open fairways like he’s looking for his third U.S. Open himself. Nobody understood the insanity of what was happening at Oakmont better than he.

A year after Chambers Bay, I was so eager to get the Oakmont show off to a good start. I wanted us all to breathe. I know I was on edge, going into it. Golf can put you on edge. There are a lot of rules, written and otherwise. Don’t say driving range. Do say practice tee. And a hundred others.

I had an idea. Just prior to going on the air Thursday morning, I gave one of our production assistants a little stash and told him to return with a dozen beers. We poured them into maybe 20 little Styrofoam coffee cups and had ourselves a toast. Poor Loomie. He was in a truck somewhere far away and couldn’t see a thing we were doing. We mush-clinked Styrofoam and I said, “Have fun. It’s just f—ing TV.”

Part of my job is to be the quarterback, to set the mood. When my father, Jack Buck, was doing baseball, the attitude was always, This is a game. I felt we needed a shot of that. It wasn’t about the alcohol content of six ounces of beer. It was about creating a mood.

Then we had a four-hour rain delay.

Hey, that’s golf, and that’s live TV. You take what you get.

Our get was five great years with great people and great experiences. Six, if you count the reconnaissance trip we made to the 2014 U.S. Open at Pinehurst. I was hanging with Greg Norman. Incredible person. So charismatic. And fit like you wouldn’t believe! He gave me a useful tip: “Don’t call them PGA players, mate. They play the PGA Tour.” I knew that, I knew that! But who among us is perfect, or would even want to be?

NBC Sports does a great job with golf. I’m happy for the people there. But I wouldn’t trade the experiences I had doing golf for anything. We were getting better and better. I’m certain of that. Just one request from @Buck, put the top of the leaderboard on the damn screen and leave it there.

We shut down that Tap Room. When we came in, it was Father’s Day. It wasn’t when we left.