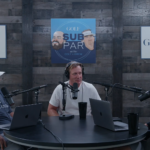 Jeremy Roenick’s playing career is long over, but is he looking for new work as a scout? The nine-time NHL All-Star knows a thing or two about the game of hockey, part of a small group that’s played more than 1,000 games, scored more than 500 goals, and amassed more than 1,000 career points.

But perhaps Roenick’s most notable accomplishment is having more career penalty minutes than games played, goals or points. His tough-as-nails approach to the game earned him respect as a “hockey player’s hockey player,” unafraid to embrace the sport’s rough-and-tumble reputation.

On this week’s episode of GOLF’s Subpar, the former NHL star broke down the overlap between his raucous hockey career and his off-ice passion, golf. Roenick dug into all things golf and hockey — a pair of sports with a notorious degree of overlap — revealing to Colt Knost and Drew Stoltz which PGA Tour star he thinks would make the best hockey player.

“Now? Probably [Brooks] Koepka,” Roenick said. “He’s built like a hockey player, he’s got the mentality, he doesn’t give a s—. I would probably go with Koepka.”

Sure, Brooks’ reputation as one of the PGA Tour’s fittest players probably factors into Roenick’s equation, but it’s certainly a feather in Koepka’s cap to have earned the respect of a fellow fierce competitor.

“He’s aggressive, He don’t give a s—-,” Roenick said. “He’s firing at pins, it doesn’t matter if it’s a major or nothing. He plays best in the majors. He just has that mentality.”

You can watch the rest of Roenick’s Subpar interview with Knost and Stoltz — including which PGA Tour players he thinks need some tough love and his picks for the NHL’s best golfers — in the video below or by subscribing to Subpar on Apple Music or Spotify.