How does Bubba Watson always play so well at TPC River Highlands? He thinks he knows the answer 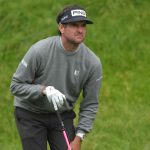 Bubba Watson is vying to join Billy Casper as the only player to win the Travelers Championship four times.

Another year at the Travelers Championship, another week of being in contention for Bubba Watson.

The 42-year-old has won a quarter of his 12 career victories at TPC River Highlands, longtime host of the Travelers Championship, and this week, has a chance to tie Billy Casper, the only player to win the tournament four times.

“It would be with great company, but forget that,” Watson said after posting his second-straight 66 on Friday. “Just winning here or winning anywhere four times, or four times ever on Tour, just all those things all add up.

“Never dreamed I could win that many times,” Watson continued. “And now at one place having a chance to get four times and tie one of the greats of all-time, yeah, be a thrill of a lifetime.”

In addition to his three wins at the Travelers, Watson has finished in the top 14 four times. It’s clear that something clicks for him in Cromwell, Conn. But what is it exactly that enables him to play so well at TPC River Highlands? Turns out, Watson has a guess.

“If you look at some of courses, it’s always courses you can move the ball forward,” Watson said. “I just — it’s no fun for me to have to chip out sideways of the rough.”

Watson was referencing the U.S. Open’s notorious difficulty when it comes to the length of the rough. Watson has only one top 10 — a T5 in 2007 — in 15 appearances at the U.S. Open, and he’s missed the cut eight times. Compare that to the Masters, which he’s won twice, finished in the top 20 three other times, and only missed one cut.

“Augusta, you can still hit shots,” Watson said. “Even though they have a little rough now — which everybody has been wanting them to go back to no rough — but you can play shots out of the trees, off the pine straw, out of that little bit of rough.

“L.A. (Riviera) I’ve won a few times as well,” Watson continued. “There is not really any rough. You can maneuver the ball from many different spots on that golf course. Same thing as here [at TPC River Highlands]. I feel like after the U.S. Open this is light rough. Even though this is heavy rough, it’s still lighter than U.S. Open and you feel like you can always move the ball forward. Any golf course where I feel like I can always move it forward from the rough or from the fairway, then I feel good around it.”

Watson continues his quest for a fourth Travelers title on Saturday afternoon at 2 p.m. ET alongside 36-hole leader Jason Day.