Koepka-DeChambeau beef made into a song (and guess who loves it?) 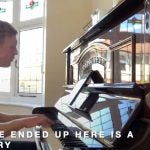 Consider this, then, Brooks and Bryson Unplugged.

On Monday, a previously unseen video showing Koepka’s displeasure with DeChambeau during a Golf Channel interview worked its way online. On Thursday, it was put into song. Sam Harrop, who has written numerous other golf-themed parodies (which you should check out here), penned and sung one for the Brooks-Bryson beef.

To the tune of the Backstreet Boys’ ’90s hit As Long As You Love Me.

“The people asked, so I did the honourable thing and produced a song to go with golf’s biggest storyline, Brooks vs Bryson,” Harrop tweeted. “They say there’s a thin line between love and hate, right?”

If you weren’t among the millions who viewed the since-taken-down video, a recap: After the second round of last week’s PGA Championship, Koepka began answering a question, when 22 seconds into the 45-second video, DeChambeau walked by. Koepka shut his eyes for a couple of seconds, rolled them, shut them again, then unloaded, the latest addition in their drama.

Which led to Harrop’s one-minute, 45-second song. Its lyrics follow, which include references to the leaked video; Koepka’s red ant jab from the WGC-FedEx St. Jude Invitational last July; DeChambeau’s mention of Koepka’s abs in early January 2020; the Player Impact Program; and the announcement of the latest match, between the teams of DeChambeau and Aaron Rodgers, and Phil Mickelson and Tom Brady:

As of Friday afternoon, the tweet of the song had over 200 comments and 5,200 likes. And 1,100 retweets, including one from Koepka.

What fans don't fully appreciate about PGA Tour fields, according to Rory McIlroy

2021 CJ Cup live coverage: How to watch Round 2 on Friday

Will we ever see another player dominate like Tiger Woods? This golf broadcaster says yes

‘Is that Jordan Spieth to a T or what?’ Spieth nearly hits fan, makes next shot