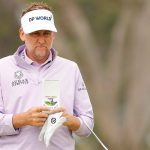 Ian Poulter shot a three-under 68 on Saturday at Torrey Pines.

Many players have a love-hate relationship with the U.S. Open.

Ian Poulter’s has been more of the hate-hate variety.

In 15 starts in golf’s toughest test, Poulter has zero top-10s, four missed cuts and a withdrawal.

“I’ve hated it for 14 years,” he said of the championship halfway through the 2018 edition at Shinnecock Hills. “I came into my first U.S. Open, and I wanted to enjoy it, and I hated it. I hated a lot of U.S. Opens through the years, to be honest, because I’ve gone home early and I haven’t had the finish that I would have liked.”

Poulter was just getting started. A day later, after the USGA was roundly criticized by players for letting the greens get too crispy, Poulter unloaded both on social media …

Another low point came in 2008 at Torrey Pines, when Poulter — well on his way to a missed cut — withdrew with a wrist injury with three holes still to play in the second round. (His wrist had been bugging him heading into the week, the result of a tennis match he had played before the Open with Justin Rose.)

Poulter’s feelings on the setup that week?

“Hated it,” he said Saturday with his trademark candor.

This week, though — 13 years after Torrey’s maiden Open — Poults is singing a different tune about the setup on the windblown cliffside course, perhaps because he’s been playing like a guy who could actually win this thing, his confidence building by the day. Thursday: 74. Friday: 71. Saturday: 68!

“U.S. Open golf is always frustrating,” Poulter said after his sporty six-birdie performance that boosted him to even for the week and within striking distance of the leaders. “You know it right from the outset, but they’ve done a really good job this week. I think the rough has been tough but fair in places. I think around the greens it’s been very, very juicy and very hard to predict lies. I think from kind of the fairway positions, they’ve given you a couple of opportunities.”

But Poults’ praise didn’t end there!

“Credit to those guys,” he added of the USGA’s setup czars. “I like what they’re doing. I like the trend they’re on, and hopefully we can make it a little more enjoyable at times.”

Another 68 on Sunday and Poulter might find this event a lot more enjoyable.