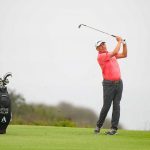 Steve Allan is ridiculously good at golf. His two rounds at Torrey Pines illustrate how ridiculously hard the U.S. Open is.

LA JOLLA, Calif. — Steve Allan is so much better at golf than everybody else at your club, it’s hilarious. And still he shot a first-round 80 at the tournament being played here. Only one score was higher.

Allan is 47, a native Australian born to Scottish parents who married a girl from Arizona. He plays out of the Arizona Country Club and there’s a college-bound golfer there, Gavin Aurilia — son of the retired shortstop, Rich Aurilia — who can beat Allan on a good day. But the point is that Steve Allan, journeyman golfer, is very good at golf.

For one thing, Allan qualified for this U.S. Open, and needed three really good rounds of golf, one in a local qualifying event and two in a sectional qualifying event, just to become one of the 156 golfers playing in this 121st U.S. Open. Allan has now played in five of them. How many people can say that?

For another, Allan won the 2002 Australian Open, and only one person can say that.

He and his wife, Bridget, have three sons, one of whom, Liam, was caddying for his father, wearing a yellow bucket hat, a nod to the lid style often worn by the late and beloved Australian golfer Jarrod Lyle. You don’t have your son caddie for you and not grind out every last shot.

Allan says his play was poor, but it wasn’t for lack of effort.

About seven hours later, he was on the tee of the par-5 ninth, his final hole of the day. He knew he needed a 5 for 79.

His drive was short and left, in rough so deep you could only see about half the ball. He chopped it out with a 9-iron. He had 186 for his third.

“And I’m thinking, `It would be nice, not to shoot two 80s. The breeze was into us, off the right. And I hit a holding fade with a 6-iron.” He has reddish hair, a gap-toothed smile and a a mottled accent.

His last full iron shot was a beauty, and it finished exactly hole high, about 20 feet left of the hole. “I wasn’t going to ram the first putt, knowing I needed two putts to break 80,” Allan said. He lagged it to two feet and tapped in.

A pro’s 5. A lousy tee shot and still he made an easy par. That is, easy if you are ridiculously good at golf.

Father and son, player and caddie, hugged. Mother greeted Liam and, shook his hand and said, humorously and with mock officiousness, “Good job, son.” The tournament as family affair.

“Coming here, I thought, `If I play well, I can make the cut,’” Allan said in an interview. “If you had told me on Thursday that I was going to make the cut, I would have been at least somewhat happy.”

Somewhat happy is the unofficial mantra of the journeyman golfer. Or maybe all golfers. Allan played a practice round with Marc Leishman, a fellow Aussie. Upon seeing Allan at Torrey, one of the old-time Tour caddies said, “Jesus Christ — what are you doing here?” Liam got to meet Adam Scott. Not Allan’s highest purpose in coming here, but, still, good times.

Allan’s scouting report, one that the other 155 golfers would likely agree with:

*Short putts above the hole and downwind are wicked.
*The rough beside the greenside traps, at least in places, is deeper than deep. There’s not enough spin in the world to stop it from some lies.
*After poor drives, there are many shots out of the rough cannot go farther 150 yards.
*There are no true birdie holes. It’s defensive golf from the start. You make up ground by not making too many bogeys. You’re going to make some.

A lot of prep work for two competitive rounds.

“I think they pay everybody here, so we should come out in front for the week,” he said. Yep, $10,000 even if you shoot 159 to claim the last spot all for yourself.

The Allan fivesome was in no rush to drive back to Phoenix. They were at the U.S. Open, in La Jolla. The hotel was paid for. The weather was lovely. Yes, dad didn’t make the cut. And still he seemed somewhat happy.