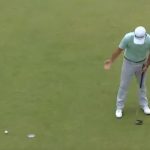 Brian Harman on Saturday after his first putt on the 6th hole at Torrey Pines.

Brian Harman, as he walked off the par-4 6th at Torrey Pines on Saturday, took a longer-than-normal look at the cup.

He had, after all, taken longer than normal to get to the bottom of it.

During Saturday’s third round of the U.S. Open, Harman hit his drive down the right side of the fairway, dumped his approach into the right greenside bunker and pitched on to 5 feet, 5 inches. Three shots. But Harman would finish with a 7. Four putts.

The first putt burned the left edge of the hole. It went 8 feet, 2 inches. He’d have 3 feet for bogey.

The 3-footer coming back burned the right edge of the hole. It went 4 feet, 3 inches. He’d have 1 feet, 3 inches for double bogey.

Harman would hit the final putt maybe a half-second after the last stopped rolling. In. Finally. He had started the hole at two under and finished at one over. According to the NBC broadcast, it was the seventh four-putt of Harman’s career.

“And that is what can happen at a U.S. Open,” analyst Gary Koch said on the broadcast. “Off line just a little and you pay the price. So from one under and a great start, now plus two.”