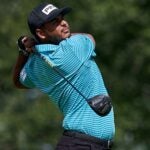 With the coronavirus pandemic still spreading globally, Augusta National will not welcome fans — er, patrons — to its grounds for the first time since the tournament was first staged in 1934. A Masters without roars will surely be strange, and the new spot on the calendar will only continue to remind us that things are decidedly not normal.

Instead of its traditional April slot on the calendar, the Masters will be contested Nov. 12-15, and the usual spring-blossoming azaleas will be replaced by fall foliage. And with no Masters round ever contested later than April, no Tour pro really knows how the course will play — save for the few who have played the course in November.

Sebastian Muñoz is among the rare few who have played Augusta National in November. He got a shot at the course last fall in preparation for his would-be first Masters appearance this spring, though those plans obviously changed.

“It was cold,” Muñoz remembers. “I booked for two days, so the first day it was gorgeous. I played like around noon or a little later. It was like 70, 65. It was just long that time, but they told me it was playing different in April.”

The temperature average in November is slightly cooler than it would be expected in April. The typical April high is 77 degrees, while the lows drop into the upper 40s. In November, that high doesn’t usually get above 70 degrees, while the lows drop down to the lower 40s. Not a significant difference, but enough to potentially force players to battle different conditions than the ones they’re used to.

Munoz canceled his tee time for his second day at Augusta. The temperatures were in the 40s for his 8 a.m. tee time and he did not want to contend with such (relatively) frigid conditions. In November, he won’t have the luxury of being able to opt for a cozy morning in bed instead of facing the cool Georgia morning air.

On the par-4 11th during Muñoz’s lone round at Augusta, he hit a 3-iron (!) into the green for his second shot. The hole plays out to a meaty 505 yards during the Masters, but in the spring players typically don’t have that much club into the green. He was also unable to reach the fairway bunker on the 18th hole, which normally comes into play for nearly every player in the field.

“It was just playing longer,” he said. “They told me I should expect to play shorter distance, but it does play longer (in the fall).”

It seems as though this year the tradition unlike any other will also play longer than any other.