How to watch the Masters on Saturday: TV schedule, streaming, tee times 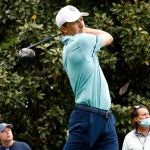 Jordan Spieth on Friday at the 2021 Masters.

It may seem like the tournament just started, but we’re already at the halfway point of the 2021 Masters at Augusta National Golf Club, and the players who made the cut will now battle it out on Saturday to get into position for a win. Here’s everything you need to know to watch the third round of the Masters.

Jordan Spieth was a popular pick heading into Masters week, having just completed his PGA Tour comeback with a win at the Texas Open. It was the 12th of his career, but his first since all the way back in the summer of 2017. While Spieth’s recent play made it tempting to bet on him, his years of struggles before this season began made a quality finish no sure thing.

But after two rounds at Augusta National, it seems like Spieth has captured some of his old magic. The three-time major winner fired a four-under 68 on Friday, highlighted by a 30-foot birdie bomb at the par-4 17th. The stellar play left him at five under for the tournament and in a tie for fourth.

The lone man sitting atop the leaderboard is Justin Rose. Rose built a huge lead with a scintillating 65 on Thursday, making a runaway victory a realistic possibility. But halfway through his second round that lead had almost entirely disappeared. Fortunately, Rose was able to recover on the back, posting three late birdies to finish with a 72, leaving him with a one-shot lead over Will Zalatoris and Brian Harman.

SIGN UP FOR THE DISNEY BUNDLE (DISNEY+/HULU/ESPN+) TO WATCH THE 2021 MASTERS, THEN ENJOY EVERYTHING ALL THREE PLATFORMS PROVIDE

How to watch Masters Round 3 on TV

CBS will air the third round of the 2021 Masters with four hours of coverage from 3-7 p.m. ET on Saturday.

How to stream Masters Round 3 online

You can stream the third round of the 2021 Masters online in various ways via ESPN+, Masters.com and the Masters app, including featured group and featured hole coverage, as well as the simulcast of the CBS broadcast. Here’s the Masters streaming schedule for Saturday:

SIGN UP FOR THE DISNEY BUNDLE (DISNEY+/HULU/ESPN+) TO WATCH THE 2021 MASTERS, THEN ENJOY EVERYTHING ALL THREE PLATFORMS PROVIDE

How to bet on the Masters — risk-free!