2020 Tour Championship: How to watch round 3 at East Lake Sunday 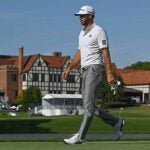 It’s time for the third round of the Tour Championship from East Lake GC. Here’s everything you need to know about watching the penultimate round of the FedEx Cup Playoffs on Sunday.

Dustin Johnson still holds the lead heading into Sunday at the Tour Championship, which will end (in atypical fashion for a PGA Tour event) on Labor Day Monday in the U.S.

Johnson, who began the week at 10 under as a result of the Tour Championship’s carryover-based scoring system, holds a narrow lead over the field at 13 under after a pedestrian opening two rounds. Sungjae Im and Xander Schauffele are closely lurking behind DJ on the leaderboard at one and two strokes back, respectively.

The pair launched themselves into contention after consecutive rounds in the 60s to open the weekend, but they’re far from the only big names near the top of the leaderboard. Justin Thomas (-10), Collin Morikawa and Jon Rahm (-9) round out the top 5 and figure to factor heavily down the stretch.

Of course, there’s added motivation for everyone atop the leaderboard this weekend with the Tour Championship’s gargantuan $15 million winner’s share.

You can find full information about streaming the 2020 Tour Championship online or watching the action on TV below, along with full first round tee times.

Golf Channel will provide early coverage for the final two rounds, supplemented by national television coverage on NBC. Check out the full TV schedule below.

You can stream the entire 2020 Tour Championship online in various ways. You can catch both the Golf Channel and NBC TV broadcasts online at nbcsports.com/live by logging in with your cable credentials. Another way to catch the action is with PGA Tour Live, which also includes featured group coverage, though you’ll need a subscription to access the stream.