Rick Reilly on his round with Trump, and why Trump’s cheating is about more than just golf

Rick Reilly has been one of America’s most recognizable — and funniest — sports columnists for decades. His latest book, Commander in Cheat, mixes humor and outrage to litigate the case against Donald Trump not through policy and politics, but through his behavior on the golf course.

Reilly should know. After all, he once played a round with the future president and watched him shamelessly shave strokes off his score first hand. “Golf is like bicycle shorts,” Reilly says, “It reveals a lot about a guy.” We spoke to the legend about his love of the game and why its integrity matters to him.

I hated golf because my dad played it. He would come home drunk and we could hear those clicks of his spikes on the sidewalk and it was a horrible sound. In those days, golf equaled something horrible for me. But then I went with friends to the range and the balls were flying against the perfect blue sky in Colorado and it was like, wait a minute, this isn’t so bad.

What’s the lowest your handicap has ever been?

How often do you play?

I can’t play more than twice a week or my back gives out.

I think if you haven’t played Pebble Beach you’re just practicing. Pebble Beach is the greatest thing I’ve ever laid eyes on in any kind of weather. Jesus, even if you’ve never played golf, you should pay that much just to walk it.

Ever have an ace?

Yeah, I rented a par three in Broomfield, Colorado, for two days for a column. The idea was I would just play until I got a hole in one. My son was out there with a first baseman’s glove catching all the errant shots. I finally made one and we rejoiced. But just as people who adopt get immediately pregnant after they sign the adoption papers, I then ran off three straight on other courses. One of them had Al Michaels doing the play by play. I was golfing with Al and I hit it and it started spinning back toward the hole and Al launched into play by play mode: Hold on folks, it’s not done yet, it could be, it might be, it is!

Arnold Palmer once told me that he never did a business deal until he played 18 holes with the guy. He said he could find out exactly who a guy is over four hours. They can’t hide it. And what you find out about Trump in golf is that he has to win. Whatever it takes. He doesn’t care about the money. He has to be the winner and you have to be the loser. And if that means kicking a ball out of the rough, having his caddie lie for him, taking all kinds of mulligans, you are going to lose. He kicks the ball out of the rough so often they call him Pele.

You seem to firmly believe that golf is a game of honor.

Yes. And Trump doesn’t offend me so much as a voter as he does as a golfer. We don’t cheat each other. The way I learned the game was to call your own penalties. If you cheat, then you despoil the game. Nobody should be able to say I shot 68 when they didn’t even break 80. I get lying about politics, but golf, you should never get to lie about golf.

Celebrities
President Trump won a 2018 club championship — without actually playing in it!

Are you ready for the book to be called “fake news” by him?

By all accounts, Trump is a pretty good golfer. So why lie and exaggerate?

Exactly. He has a good swing. He’s probably an 8 or a 9. That’s pretty good for 72 years old! Why do you have to cheat? I tried to make this book apolitical, I tried to make it about golf. He’s wrecking it. He’s leaving a big, wet orange stain on the game I love.

Who’s the best golfer you’ve ever played a round with?

I was on the range once with Tiger at Stanford. And he did things I have never seen before or since. You could just call shots and he’d hit ‘em. You’d say hit a hook and he’d hit a hook the width of the range. Same with a slice. He could hit a three iron straight up in the air. We placed a beer cooler 96 yards away and he hit two balls out of 10 into the beer cooler. He’s the greatest talent I’ve ever seen.

You spend part of the year in Italy, how is recreational golf different there?

There’s a little par-three course in Florence, and the first time we went there they were all drinking wine and eating. The neighbor lady brings over this incredible lunch — pasta, meat, tiramisu, wine — and the only reason these guys come to the golf course is to eat and drink. They don’t really give one fig about the golf. 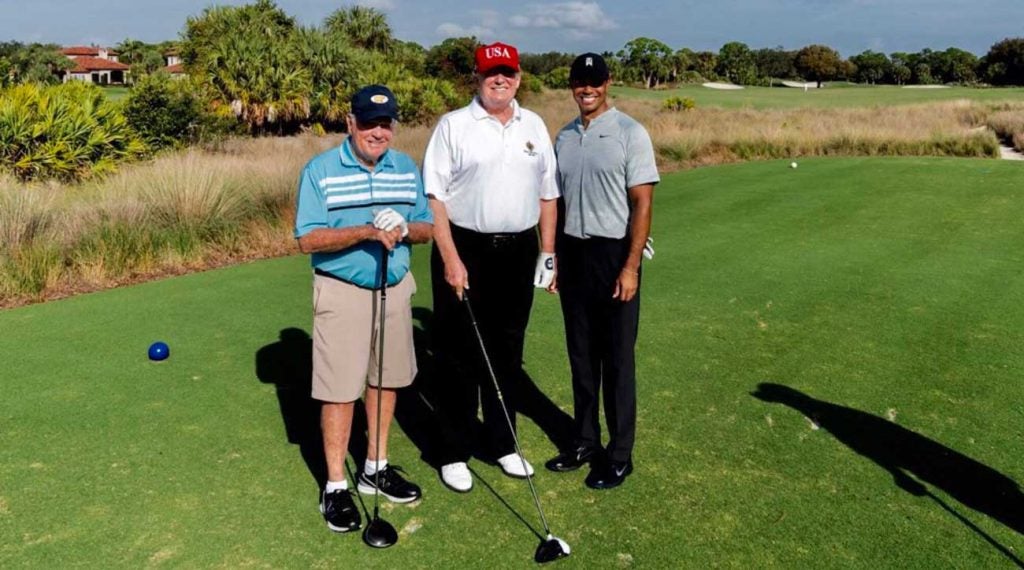 You spent time caddying for your 2003 book Who’s Your Caddy? Has caddying changed in the past 16 years?

Oh, yeah. For one, you can wear shorts on tour now. Guys make a lot more money. And now these caddie books use lasers to determine the exact grade of each little hillock of the green. It probably should be illegal. Doing that book was so much fun. I remember Tom Lehman and I were in the hunt and we were talking about the shots. What do you think? You don’t get to do that in any other sport. Tom Brady doesn’t get to the line and turn to his caddie and say, What do you think, do you think the linebacker is coming? I think caddies are way underrated. I hope Matt Kuchar is listening.

What would you have done if he stiffed you as his caddie?

He did make an arrangement with the guy, so he didn’t exactly stiff him. But it’s just the nobility was missing. Here’s Matt Kuchar who’s making millions and this is a guy for whom the tip might have changed his life forever — and his family’s life. I like Matt, but you have no idea of the power you have when you do the right thing. Also, does he have a PR guy?! How did you think this was going to play?!

Dan Jenkins, the great sportswriter, recently passed. You guys overlapped in your time at Sports Illustrated. What did you learn from him?

Funny shit was always coming out the side of his mouth. It wasn’t so much what he said, he just taught me not to be afraid. My dad got SI. And I read it from the time I was 5. He was so funny and irreverent. And once you met him and drank with him, he would always say f— ’em. Editors don’t know anything. Screw them. And that expense account is for murdering. So get on it! He wanted to spend as much as you could and have fun. Your only boss is the guy in the chair who paid to read the magazine. So don’t be afraid. He covered skiing when there wasn’t any golf or college football. So one time he bought a fur coat in Gstaad, Switzerland. This was back in the days when you flew first class on assignment. He comes back and puts the fur coat on his expense account. And they send it back to him. You can’t expense a fur coat. So he sends the report back the next day with no fur coat but the exact same amount with a note that said, FIND IT. No one screwed with his copy. What a talent.

Chris Nashawaty is Entertainment Weekly’s film critic and the author of Caddyshack: The making of a Hollywood Cinderella Story.