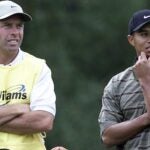 Steve Williams and Tiger Woods at Sherwood Country Club in 2000.

The 15-time major champion didn’t sit for an interview or help craft the story for the two-part doc entitled Tiger — the first part of which was released Sunday night — citing an existing media relationship. It wasn’t just Tiger missing; nobody from Woods’ current inner circle participated.

But that cleared the stage for a central member of Woods’ former inner circle to take over: longtime caddie Steve Williams.

Williams wasn’t there at the beginning, during the hyper-accelerated golf development of Woods’ childhood. And he wasn’t there at the end, when Woods completed his legendary comeback at the 2019 Masters. But in between, Williams was there for a heck of a lot of Woods’ life, on and off the course. He was by Woods’ side for 13 major championship victories, serving as his caddie, and he was by Woods’ side on his wedding day, too, serving as best man.

For more than a decade, Williams was the ultimate Tiger insider, and in the two-part film he serves as a riveting tour guide. (Heads up: Some of the stories referenced below don’t air until Part 2, next Sunday night!)

“The gallery was a completely different scene than what I was used to,” Williams says in his first on-screen appearance, describing the shock of watching Woods disappear into a throng of autograph-seekers. “He’d come away with a golf shirt that had all these different Sharpie marks on it.”

To hear Williams tell it, everything was done with winning major championships in mind. That was their partnership’s clear No. 1 priority. Sometimes that took him to spots he couldn’t believe, like the side of one Canadian road:

“He’s got this thought in his head, and he couldn’t wait till the next day or until we got back to the hotel, it had to be now. No one would do that. Nobody.”

Williams is full of colorful tales. He adds another from the 2001 Masters, the final leg of the Tiger Slam. At this point, the eyes of the entire sports world had been closely focused on Woods for months, wondering how he’d perform. By Sunday, just one other player stood in his way:

“His good mate Phil [Mickelson],” Williams recalls with a chuckle.

That final round turned into a coronation, but not before Woods gave Mickelson one final reminder of who was No. 1, blasting a 3-wood tee shot past Mickelson’s driver on the 13th hole. As Williams recalled it:

“Phil says to Tiger, ‘Do you always hit your 3-wood that long?’ And Tiger’s like, ‘Further. Normally further than that.’

But life ain’t all green jackets and grand slams, even for Tiger Woods. Williams witnessed firsthand just how much fun it could be to be at the top of the golf world — but how challenging it could be, too. He recalls several emotional conversations when Woods was struggling with his fame. At one point, he says, “being Tiger Woods had taken its toll on Tiger Woods.”

Williams ushers the viewer through several milestones of his boss’ life. He remembers that when Woods was first dating Elin Nordegren, he’d correct Williams on the pronunciation of her name — that’s how he knew things were serious. He was there after Earl’s death, too, and for Woods’ emotional victory at the Open Championship several months later. He was there when Woods considered walking away from the game altogether. And he was there when Woods defied conventional and medical wisdom at the 2008 U.S. Open.

“I said to him, ‘Hey Tiger, you might be jeopardizing your career here. Maybe this is a time to quit.’ And I’ll never forget: He looks at me and he says, ‘Stevie, f— you, I’m winning this tournament.'”

Think of the experiences in those years. Consider the hours spent by Woods’ side. Few other relationships in the world mirror that of a player and his caddie. Few other caddies work for a player like Woods. Each time Williams came on screen, I sat at attention.

In 2010, in Woods’ first start after the scandal, he tied for fourth at the Masters, then took off more time in the months that followed. Williams asked if he could caddie temporarily for Adam Scott.

“I ran that by Tiger, and he said absolutely, no problem, but then a couple days before the tournament Tiger changed his mind. He had his agent call. He said, ‘If you go and caddie for your friend, that’ll be the end of your time caddying for Tiger.'”

He caddied anyway, assuming it was an idle threat. But a couple days after the tournament, Williams got the call: Williams was out. Really out. “I didn’t think that we’d have no communication for the rest of our life,” Williams said. “That just didn’t even enter my mind.”

Theirs is a complex relationship, no doubt. But one of Williams’ simplest insights from the doc doubles as his most enduring:

“When you understand what it is to be Tiger Woods, to be in his shoes, to go through what he does, you can’t help but admire the guy and want to protect him a little bit.”

Some caddie instincts stick for life.