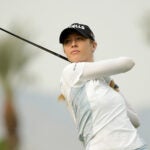 Nelly Korda tees off on the 2nd hole during the second round of the ANA Inspiration.

RANCHO MIRAGE, Calif. — For Nelly Korda, there are different ways to quantify success.

During her first two seasons on the LPGA Tour, she had a standing bet with her big sister Jessica: whichever Korda finished lower on the money list had to buy the other one a purse of her choosing. “Such a girly thing,” Nelly says with a sigh. Following her rookie year, in 2017, she had to pony up. “It was soooo painful,” she says, of both the damage to her ego and bank account. The following year, Nelly won her first tournament, at the age of 20, and finished 13th on the money list, five spots ahead of Jessica. She exacted her revenge at the mall, and the sisters decided to call off the bet.

Nelly has enjoyed three LPGA wins, as well as an eight-shot blowout at last year’s Women’s Open de France. When you crunch the numbers, she’s up to third in the world, but she doesn’t sound that impressed with herself. “I don’t even know how the world ranking works,” Korda says. Is getting to number one a burning desire? “Umm, not really.” So what is it that motivates this precocious talent? “Winning major championships,” Korda says. “That’s the reason why I started playing golf, watching the majors and realizing that winning them is what I wanted.”

Korda is halfway toward realizing that dream two rounds into this ANA Inspiration. With nearly flawless rounds of 66-67, Korda leads Mirim Lee by two strokes and only a pair of other players are within six shots.

Korda’s graceful, athletic action has greatly impressed – “She swings it so pure,” says Mel Reid – but clutch putting was the key to her bogeyless second round. After starting on the back nine, Korda missed her only fairway of the day on number two, her ball disappearing into the greedy rough. Various misadventures ensued on this normally reachable par-5 until Korda buried an 20-footer to save par. “I was super happy with rolling that putt in,” she says. “I was like, just get me off this hole.” On the very next hole, she redeemed a loose iron shot and iffy chip by burying a 25-footer to escape with another par.

Putting has never been the strength of Korda’s game (last year, she finished 16th in driving distance and 3rd in greens in regulation), but at last month’s Women’s British Open, she switched to a left-hand-low grip, and her confidence has surged. “As good as she hits it, if her putter gets hot, look out,” says Christina Kim, who is tied for 5th, at 5-under.

Winning a Grand Slam would carry on the family tradition, albeit so far it has happened only on the tennis court: Korda’s father, Petr, won the 1998 Australian Open and her kid brother, Sebastian, 20, took the boys division at the 2018 Australian Open. (He is now a pro, ranked 205th in the world.) Jessica, 27, has seven top-10s in the majors but has not been able to break through. Has big sis offered any counsel? “Obviously we lean on each other, but at the end of the day, you need to learn from your own experiences,” says Nelly, who finished third at last year’s Women’s PGA Championship. “I can’t soak up what she has or hasn’t done. It’s all about putting yourself into the position and keep learning.”

If Nelly sounds like an old soul, it may be because she has had to take on the unfamiliar burden of being the family star. Jessica has five career victories but is winless since early 2018, struggling with her swing and her health. (She W/D’d from last month’s Women’s British for unspecified, non-Covid medical reasons.) This has upended the familiar dynamic between them; after Nelly lost on the final hole of the 2018 HSBC Women’s World Championship, she dissolved into her sister’s arms, bawling. Jessica (who turned pro at 17) has always relished being the big sister. Back when her siblings were pre-teens, she once dropped $80 at Target on candy to leave behind for them before heading out on a four-week LPGA road trip. Says Jessica, “Two weeks later, Nelly called and said, ‘Jess, our stash is low, we need you to come home.’ Mom would find the wrappers, and I’d get in so much trouble.”

When Jessica was home from tournaments, “I always wanted to be with her,” Nelly says. “If she was going to movies with her friends, I was that sister who insisted on coming …”

When it was time to buy her first house, Jessica moved 100 yards down the street from the family home in Bradenton, Fla. “They couldn’t drive,” she says of her siblings, “so I bought this house because I wanted them to be within walking distance. We’ve always been really, really close. If there was a bad storm, they’d be in my bed.”

Upon reaching the LPGA, Nelly used her successful sister as a measuring stick. She recalls with relish one of the first times she finished better than her in a tournament, at the 2017 Volvik Championship.

“I was struggling with my putting,” Nelly says,”but on the final green, I had a birdie putt and realized, ‘Ohmygosh, if I make this, I’m going to bump her out of the top 10.’ All I was focusing on was making this putt. And I did. Right after the round she texted me, ‘Are you serious?’”

Yet upon reaching the LPGA Tour, Nelly was surprised to find her sister gently pushing her away.

“My whole thing was when she came out, I wanted her to be her own person and find her own way,” Jessica says. “I’m always going to be here if she needs me. I didn’t want her to be disadvantaged by being my little sister. I want her to be Nelly, whoever she figures out that is.”

And who is that? “She’s fairly quiet, pretty reserved, one of those people where everything she does is intentional,” Christina Kim says. “If she’s going to say something, she makes sure she means it, and I appreciate that about her.”

Nelly is a goofball who charmingly posts her foibles for all the world to see on social media. As it turns out, she is also one of the best players in the world. She may not need fancy handbags or world ranking points to prove it, but a major championship will do quite nicely.