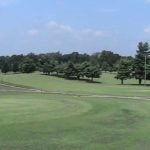 Reminder: Father’s Day is just three days away! If you are a son or daughter with a golf-loving dad and happen to have some extra cash lying around, there is still a way to get your pops not only a gift he will never forget, but also arguably the best Father’s Day gift ever:

His own golf course.

Well, for one day, anyway.

For a cool $5,000 via Groupon, you can now rent out Oak Hills Golf Course in Greenbrier, Tenn.

Under the terms of the deal, your dad and three guests would have the place to themselves, playing as many rounds as they like from 8 a.m. to 5:30 p.m. Included in the offer are green fees and carts, a dozen golf balls for each player, plus unlimited beer and hot dogs to keep your father and his friends on a full stomach.

Oak Hills was built in 1968 as a nine-holer before being converted to an 18-hole course in 2001. The leafy layout has five ponds and lakes that come into play on nine holes.

The offer was just released on Groupon’s site Wednesday. According to a spokesperson, no one has yet bought the experience, so act now and your dad and his pals could have first run at it.