2021 Genesis Invitational live coverage: How to watch Round 3 on Saturday 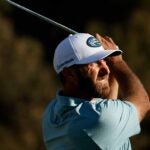 Dustin Johnson is playing like the World No. 1 golfer at 2021 Genesis Invitational.

Two rounds are finished at the 2021 Genesis Invitational, and now the real fun begins with star players battling for position on Saturday at Riviera. Here’s what you need to know to watch the third round.

Dustin Johnson is looking every bit like the top-ranked golfer in the world right now. He won the Masters in November, then the Saudi International two weeks ago, and now he has his sights set on the Genesis title. Through two rounds, he’s right on track. Johnson followed up an opening-round 68 with a 67 on Friday, putting him in a tie for second at seven under.

Despite starting Saturday T2, Johnson is well back of leader Sam Burns. Burns had an incredible round of seven-under 64 to take the lead on Thursday, and a Friday 66 kept him there. He’s now reached 12 under through two rounds, building himself a solid five-stroke lead.

But as we see on the PGA Tour nearly every week, a 36-hole lead does not guarantee a win. In addition to Johnson, Burns will have to fend off several other star players. Jordan Spieth has continued his recent hot streak and begins the weekend at six under, six shots back of Burns. Brooks Koepka, Tony Finau and Patrick Cantlay are also in the mix.

How to watch Genesis Invitational Round 3 on TV

Golf Channel and CBS will air the third round of the 2021 Genesis Invitational. Golf Channel kicks things off with two hours of coverage from 1-3 p.m. ET on Saturday, then CBS takes over for a three-hour broadcast from 3-6 p.m. ET.

How to stream Genesis Invitational Round 3 online