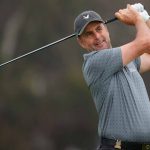 Richard Bland is tied for the lead through 36 holes.

With 36 holes complete at Torrey Pines, the cut has been made and storylines are starting to materialize at the U.S. Open. Here are five things to know for Saturday at the 2021 U.S. Open.

No, not bland as in boring. Bland as in Richard Bland, the 48-year-old Englishman who is tied for the lead through 36 holes in just his second U.S. Open appearance.

Bland went viral a month ago when he claimed his first victory on the European Tour in his 478th start, and now he’s back in the limelight. He’s been spectacular thus far at Torrey Pines as he’s five under heading into Moving Day. If he can keep up his rock-solid play on Saturday, we might have a Cinderella story in the making come Sunday afternoon.

2. Henley has a shot

Russell Henley has no top-10 finishes in a major in his career, but through two rounds in Southern California, he’s tied for the lead. Henley followed his opening-round 67 with a one-under 70 in Round 2 and will tee off in the final pairing with Bland on Saturday afternoon. Few would have picked this duo to round-out the final tee time on the weekend prior to this week, but now they are just 36 holes from glory.

The top of the leaderboard might not have typical star power, but stars are lurking just behind.

Louis Oosthuizen and Matthew Wolff sit just one shot behind, and Bubba Watson and Jon Rahm are another shot back. Further down the board are the likes of Bryson DeChambeau, Brooks Koepka, Collin Morikawa and Justin Thomas at even par.

Rory McIlroy hasn’t been a factor in many majors as of late, but he’s hoping to change that trajectory at Torrey Pines. McIlroy didn’t play quite as well on Friday as he did in the opening round, but he’s not out of contention. At one-over par, he’s just six shots off the pace and is just one good round away from inserting himself back into contention.

5. Many big names will miss the weekend

While there is plenty of potential for a big name to lift the trophy on Sunday night, more than a fair share of stars won’t be around for the final 36 holes. Among the notables to miss the cut include Will Zalatoris, Tony Finau, Henrik Stenson and Justin Rose. Additionally, Viktor Hovland will not be around for the weekend after withdrawing due to an eye injury.