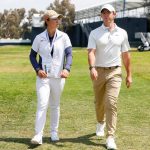 Yuka Saso finally got a chance to meet her idol at the U.S. Open.

At the U.S. Women’s Open two weeks ago, Yuka Saso was asked what parts of Rory McIlroy’s game she admires the most. Her answer was simple.

Saso took after her idol as she claimed her first major championship the next day with a dramatic come-from-behind victory at The Olympic Club. Afterwards, Saso thanked McIlroy for giving her a pre-round shoutout on Instagram that helped inspire her performance.

This week at the U.S. Open, Saso finally got to meet the man she models her game after.

“I didn’t know how to say hi,” Saso later told Golf Channel. “But he was so nice. He was so kind. He was so open.”

Much has been made of the similarities between the swings of McIlroy and the newly-minted U.S. Women’s Open champ’s of late — and for good reason. Saso’s swing is almost a carbon copy of McIlroy’s.

It’s one thing to set out to model your game after your idol’s, but to so accurately mimic the essence of one of the best swings in the modern game is next-level impressive.

“When I asked him a question, he was so honest,” Saso continued. “I hope I can ask him more advice.”

While the cameras didn’t pick up all of the advice McIlroy bestowed upon Saso, he did share some of the insights with the media during his media availability on Wednesday. And the advice works for everyone from beginners all the way to major winners.

Saso’s most pressing question for McIlroy was how to maintain top form for extended periods. There have been many flash-in-the-pan major winners, and Saso is doing her best to maintain her stay at the top.

“I just said, ‘What I’ve always tried to do is write everything down,'” McIlroy said. “Just whatever feelings you have after a practice session, even if the swing looks the same on the video, the feelings that you have and the swing thoughts could be slightly different, and those feelings and those thoughts can come and go day to day. That’s just the way golf is.”

McIlroy recommended using a dedicated journal in order to keep all the thoughts from the swing each day. He explained that it’s “boring to be at the top of the game for a very long time,” and in order to maintain form, it can be tedious. But by using a journal to jot down thoughts and feelings that work over time, losing your swing will be far less likely.

“Everyone’s got a blueprint of what their swing is,” he continued. “If they keep on top of it and they do the same things, do the same drills, over time, you fast forward 20 years, you’re probably going to have a really good career.”