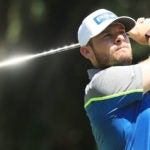 Tyrrell Hatton shot an 8-under 63 to sit in a four-way tie for the lead after the third round of the RBC Heritage.

Here are three things you should know after Saturday’s third round of the RBC Heritage in Hilton Head, S.C.

Webb Simpson began the day with a one-shot lead. At the end of the day, he was joined by three others, with three others a shot behind and another eight two shots behind.

Tyrrell Hatton, the last winner on the PGA Tour before its three-month hiatus due to the coronavirus, took the biggest leap to the top, his 8-under 63 moving him up 21 spots. Joining Simpson and Hatton at 15-under were Abraham Ancer, who shot a 6-under 65; and Ryan Palmer, who fired a 5-under 66.

The three players a stroke behind the leaders all shot 8-under 63.

Carlos Ortiz had two eagles over his first five holes; Daniel Berger, the winner at last week’s Charles Schwab Challenge, birdied half of his 18 holes; and Joel Dahmen had six birdies and an eagle.

Among the group two strokes behind were the other two players who fired 63 on Saturday – Joaquin Niemann and Chris Stroud.

At 12-under were Dustin Johnson, Brooks Koepka and Bryson DeChambeau.

While Nick Watney became the first PGA Tour player to test positive for the coronavirus, the 11 people who the PGA Tour determined came in contact with him tested negative.

Among those tested were his caddie, Joe Navarro; his first-round playing partners, Luke List and Vaughn Taylor; and Sergio Garcia, who traveled with Watney from last week’s Charles Schwab Challenge to Hilton Head.

On Friday, Watney began to feel symptoms and was tested. He had tested negative before the tournament.