Why superstitious golfers will be on edge at the 2020 Masters 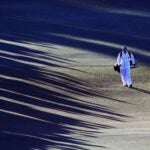 Friday the 13th has some unlucky history at Augusta National.

With masks on our faces and the spirit of Halloween in the air, you might be interested to know (on the chance you don’t already) that a Masters round will be played this year for just the third time on a Friday the 13th.

Friday, Nov. 13, 2020. The second round of the 2020 Masters. Good luck, gents. Good day to avoid cracked mirrors, black cats and upright ladders. You don’t have to worry about bats. There are no bats at Augusta National. Alfred Hitchcock could not have shot “The Birds” at Augusta National. There is no known record of anybody ever seeing a flying anything over the course, not counting Arnold Palmer in a jet.

In the ’84 Masters, Seve Ballesteros, your defending champion, shot a second-round 74 and missed the cut by a shot. He got a two-shot penalty for grounding his wedge in the hazard on 13 — the greenside creek — as he prepared to play his third shot. Dow Finsterwald, the 1958 PGA champion, was working the 13th as a rules official and called the penalty on Ballesteros, who had a reputation for trying to intimidate rules officials and playing partners with his confidence and charisma and also for pushing drops to their limit and beyond. It would take bad luck for Tiger Woods, the 2019 winner, to fail to make the cut this year on Friday the 13th. He has only missed one Masters cut in his 22 appearances in the tournament and that was as an amateur in 1996. There is no major with an easier cut to make, in part because of the 10-shot rule.

Woods’ caddie, Joe LaCava, saw Seve in action at the Masters long before Woods did. At the 1989 Masters, LaCava was caddying for his cousin, Ken Green, who was paired with Ballesteros in the fourth round. On the 10th hole, Ballesteros’s tee shot finished in a muddy area on the left side of the hole. Seve, who was contending, sought ground-under-repair relief. An official granted it to him.

LaCava, in his mid-20s and fiery, went ballistic, as Green tells the story. Green, leaving his ball on the right side of the hole, marched over to Ballesteros to offer his opinion, but not before saying to his cousin, “You stay there.”

At Green’s behest, a second rules official, Michael Bonallack, was called in. Bonallack, who ran the R&A and was intimidated by nobody, told Ballesteros that he was not entitled to relief. Ballesteros finished fifth, two shots behind the winner, Nick Faldo. Seve played in 15 Masters after that but never had a better finish. His last Masters was in 2007, four years and a month before his too-early death.

On Friday, April 13, 1979, Arnold Palmer, age 49, shot even par in the second-round and missed the cut by a shot. So did Jerry McGee, then an amateur and later a successful pro, despite a Friday 69. (Thirty years later, he became Annika Sorenstam’s father-in-law.) Ben Crenshaw, in a year he won twice on Tour, shot 80 that day. You wouldn’t think he could. That’s like a 90-shooter shooting 118.

By longstanding tradition, the Masters concludes on the second Sunday in April. But in 1979 and 1984, the Masters, atypically, concluded on the third Sunday in April, which is why there was a third-round Masters on Friday the 13th in ’79 and again five years later, when Crenshaw won the first of his two.

This year, of course, all bets are off. For the rest of the century and the for rest of eternity, if the second-Sunday-in-April tradition holds, there will never be a Friday round on April 13. That’s because the latest date for a second Sunday is April 14. That of course means the 13th is on a Saturday.

This whole discussion would be ridiculous and likely is but it is also true that few tribes on this earth are more superstitious than golfers. That truth goes way beyond Tiger’s tradition of wearing a red shirt and black pants on Sundays. (Could he not mix it up once? Red pants, black shirt?)

Jack Nicklaus played the 1962 U.S. Open wearing the same “lucky pants” for four straight days. He won in a playoff and those pants, he has often joked, could stand up without help at night in the hotel room. Ernie Els takes his ball out of play after making a birdie — its good luck is spent. Lee Trevino would not use yellow tees. Christina Kim, taking step-on-a-crack/break-your-mother’s-back to new heights, steps over the line where rough meets fairway.

No player has ever won the Masters Par-3 Contest and the tournament itself in the same year. Part of the legend of that little Wednesday event is that some tournament favorites have avoided the contest, fearing the win and all it brings; others have tanked on the 9th hole, to avoid victory.

There is no single established reason why Friday the 13th is considered unlucky. This, though, is sometimes cited: A corrupt Boston stockbroker named Thomas Lawson, famously superstitious, wrote a book, published in 1907, called Friday, the Thirteenth. In it, a corrupt stockbroker brings chaos to Wall Street on a Friday the 13th.

But the book is a novel, Lawson was not a golfer and the U.S. won the 1999 Ryder Cup at The Country Club, near Boston, on that famous day when Ben Crenshaw had a feeling.

So rest easy, happy Halloween, and look for Tiger to shoot a second-round 69 on the second Friday in November.