The 2018 Masters Par-3 Contest provided us with two of the event’s most memorable moments (although one wasn’t for the right reasons). But don’t sell the Wednesday hit-and-giggle short. The Masters Par-3 Contest, ever since Sam Snead won the inaugural event in 1960, packs quite the punch.

Here are its most memorable moments from the past few years. Today’s event starts at noon and can be streamed on Masters.com beginning at 2 p.m. (ET) and airs live on ESPN at 3 p.m.

Tony Finau’s day on the Masters short course went from euphoric to horrific in seconds. While running down the fairway to celebrate an ace on the 7th hole, Finau turned, backpedaled and stepped awkwardly on his left ankle. The cringe-worthy clip went viral after he popped his ankle back into place. He finished the round in excruciating pain, got an MRI the following morning and was told he was good to go. His opening round? A four-under 68, tied for the second-best score of the day. (More: Finau recounts his crazy par-3 ace.)

The Golden Bear unleashed a true, pure swing on the 130-yard 4th in 2015, making an ace while playing with Ben Crenshaw and Tom Watson. What makes it even better? The GOAT called his shot. “It’s funny,” he said. “I had an interview this morning and I said, ‘Well, all I’ve got to do is go out and win the Par-3 and make a hole-in-one,’ and I make a hole-in-one.”

Jack Nicklaus has won six green jackets, yet he says none of them top watching his grandson, Gary, ace the par-3 9th during the Par-3 Contest. “My wins, that’s okay,” he said, “but to have your grandson make a hole‑in‑one and watch him do it, man, that’s amazing.”

.@JackNicklaus' most memorable moment at the Masters came on a Wednesday. pic.twitter.com/3C1w7o58Qe

Watch @JustinThomas34 make a hole-in-one on No. 4 in the Par 3 Contest. #themastershttps://t.co/SWVQMzUigg

Woods struggled in 2014 and had back issues in early 2015, and no one knew if the 14-time major champ would commit to the Masters. He did, just in time, and then even played in the Par-3 Contest with then-girlfriend Lindsey Vonn and his kids — daughter, Sam (7 at the time); and son, Charlie (6) — as caddies. It was the first time Woods played the Par-3 in several years. “My two littles will be out there with me,” Woods said the day before. “It’s special.” 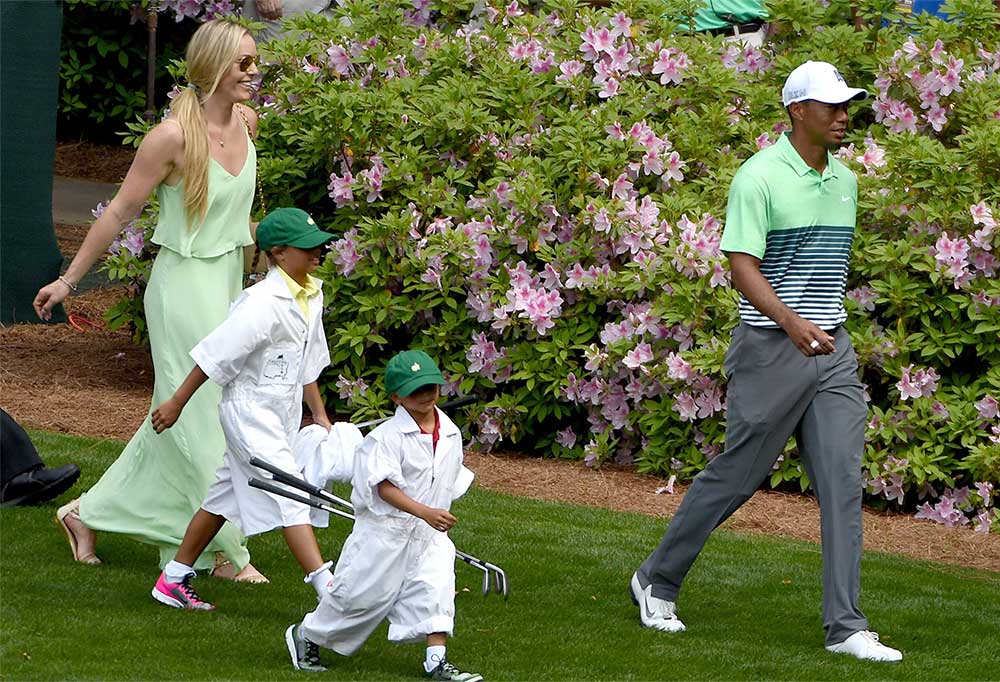 Tiger Woods and Lindsey Vonn with Woods's kids, daughter Sam (7 at the time), and son Charlie (6), as caddies at the 2015 Masters Par-3 Contest.
Getty Images

Who is the current man to beat on the Augusta National par-3 course? Jimmy Walker. Walker set the course record in 2016, when he used one ace and six birdies to shoot an eight-under 19. The previous record (20) was held by Art Wall Jr. and Gay Brewer.