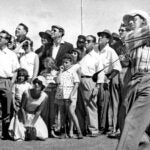 Ben Crenshaw, with his childlike wonder for golfiana in all its many forms, will sometimes encounter a player of a certain age, with a certain accent, and make this plea: Tell me all about him — tell me about the man they call Papwa!

And Gentle Ben will lean back and hear the remarkable tale of Sewsunker “Papwa” Sewgolum, with his dark skin and cross-handed grip and magical short game, South African golfer of Indian descent and a world-class talent who, at times in his prime, could not compete in the national championship of his homeland.

To reduce his flesh-and-blood life into pitch-meeting shorthand, you could say that Papwa Sewgolum was the Charlie Sifford of South African golf. It’s an inadequate analogy, of course, just as the few words typed here get you barely past the starting line of Papwa’s life. What I know for sure is that I have done an inadequate job, over the years, exploring the lives of Black and brown golfers, female golfers, handicapped golfers — golfers who moved mountains to get to the first tee. This space, both today and tomorrow, will try to address that. For starters, here’s Papwa.

He was born in 1928, nine months before Arnold Palmer, near Durban, the large coastal South African city with an enormous population of Indians, many of whom worked in sugar fields. To say that Indian South Africans in Papwa’s time and place were treated as second-class citizens is a grotesque understatement. Papwa, who could not read, grew up poor and came to the game as a caddie. In his 30s, he won the Dutch Open three times—in 1959, ’60 and ’64. (Seve Ballesteros and Bernhard Langer won it three times each, too.) Papwa’s wins were proof of what he could do, if his skin color did not disqualify him, if he had the money to get to a tournament, if his government would grant him a passport. He played in six British Opens — he finished 13th in 1963 — but no other majors.

The historic ties between the Netherlands and South Africa explain why Papwa played in the Dutch Open often, and the South African laws of apartheid explain why there were many years when he was not in the field of the South African Open. In 1965, Papwa won the Natal Open, one of South Africa’s biggest events, Gary Player chasing him. That win made Papwa a local legend. It also brought a government crackdown on his opportunities.

“In my day, everybody who followed golf in Southern Africa knew about Papwa,” Nick Price told me recently. The 1994 British Open winner came of golf age in the 1960s in Rhodesia, now Zimbabwe, to South Africa’s north. “Papwa was playing in a tournament near us, at Chapman Golf Club. I was maybe 10. I was naturally left-handed and I played cross-handed. My brother Tim said, ‘You better watch this Papwa — he plays cross-handed, too.’ I followed Papwa for a couple of holes and on 15 he flat-out shanked one. Right off the hosel. And I said, ‘I’m not playing cross-handed anymore.’ And after that, I didn’t. But I never stopped admiring Papwa’s talent and ingenuity, his adaptability.”

In 1971, Dale Hayes was an impressionable 19-year-old pro playing in his first South African PGA Championship. To Dale, Papwa was a “mythic figure” and, against the apartheid odds, Papwa was in the field that year. South Africa was so deeply segregated in that period that many years the biggest event Papwa could play in his homeland was the South African Nonwhite Open. But Gary Player had convinced the South African prime minister, V.J. Vorster, to allow Lee Elder to play in the ’71 South African PGA Championship. (In ’74, Elder became the first Black golfer to compete in the Masters.) The door was cracked open for Papwa to play in that ’71 PGA, too. Dale was mesmerized by Papwa’s unrushed manner, his long and wristy swing, his singsong English, his fine clothing. His dignity, despite his many trials. “Lee Elder and Papwa were allowed to use the clubhouse, but not the ‘white toilet,’” Dale said, disgust in his voice. “Can you imagine?”

Papwa Sewgolum was not yet 50 when he died in 1978, by then a folk hero with no money, a drinker with a bad heart. Today there’s a public course named for him in Durban. “As there should be,” Gary Player told me. “Papwa fought hatred with love.”

Near the course there’s a slum, a river — and a freeway.