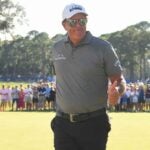 Phil Mickelson flashes his signature thumbs-up to the gallery after winning the 2021 Constellation Furyk & Friends.

Golfers like to say that golf is a game of honor, a game where players call penalties on themselves for violations nobody else could possibly see. And that’s true — to a point. The subtext is this: the player’s judgment is to be trusted. And that’s true, too — to a point.

There are times when a golfer’s competitors point out rules violations, under the heading of Protecting the Field. Caddies, spectators, rules officials, TV commentators and even home viewers do the same. To use the language of juris prudence, anybody can file a complaint. In the official rule-book language of tournament golf, you may have heard in recent years that viewers at home may no longer call in with suspected rules violation. Mmmmm — not really, though it is harder to get through than it used to be.

Which leads us to the odd situation with Phil Mickelson in the third and last round of the senior event at Timuquana Country Club on Sunday, in Jacksonville, about 45 minutes by car from the PGA Tour headquarters. The event was called the Constellation Furyk & Friends and Mickelson was leading, but his playing partner/competitor, Miguel Angel Jimenez, would not go away.

On 16, Mickelson, a famously left-handed golfer, shoved a drive into the left trees. He and his ball were in a veritable forest of pines. His ball was sitting up on a bed of pine straw like a down pillow at a better hotel.

Mickelson examined the lie and did some grounds-keeping, removing nature’s debris some inches from his ball and a pine cone further away than that. There’s Spanish moss on the forest floor at Timuquana, little leaves, pieces of bark. The usual, and what Mickelson was doing was SOP. Then, while standing away from his ball, Mickelson saw that it had moved from its original position.

A starting point of golf is to play the ball as it lies, and now the lie was different. He told Jimenez that he would be calling in a rules official.

A rules official, Todd Satterfield, wearing a long-sleeved white shirt and a tie, came rolling in on his cart. Mickelson told him, with a Golf Channel boom mic capturing the conversation, that he had moved a pine cone and that later “the ball moved an inch or two.”

Satterfield summarized the rule that governs such a situation, Rule 9.2. Here’s what the rule book says:

This is from our Sunday GOLF.com story, with the quotes taken from the Golf Channel broadcast:

“Yeah, I know I didn’t [cause the ball to move] because the stuff I moved wasn’t around the ball. I just didn’t know what the new rule is. The old rule was–“

That’s when Satterfield described the only thing that mattered, the current rule.

“Yeah, it was a minute at least,” Mickelson said, describing the time between moving the pine cone and when the ball moved.

“But you’re just going to have to make that call whether you caused it to move,” Satterfield said.

Nobody questioned Mickelson about his decision. Golf, after all, is a game of honor.

The current rule, adopted in early 2019, offers new language for an old situation, and it gives the player more leeway. Previously, the governing language required the player to make a ruling based on the “weight of the evidence/more likely than not.”

What Satterfield said — once as a question, once as a statement — was perfect, and gets to the heart of the issue: It’s up to you. Satterfield is a former Furman coach and was an elite-level amateur golfer. By implication, Satterfield was saying that golf is a game of honor, and we’ll go with what you say — unless there’s evidence to the contrary.

Golf Channel’s raw footage showed that the ball moved 30 or 31 seconds after Mickelson moved the pine cone. That happens. Mickelson wasn’t looking at a stopwatch. The different between a “minute at least” and 30 seconds is life unfolding in real time, and not the ultimate issue here.

Golfers know that when you move anything on pine needles, you can sometimes start a game of pick-up sticks, where one pine needle moves another and a chain reaction begins and in the end a ball moves. That’s a real thing, but not, in the end, the most telling thing. The final question was this: could Phil Mickelson say he was “virtually certain” that he caused his ball to move?

No, was his answer. He could not say that he was virtually certain that he caused his ball to move.

In other words, this was an example of the weirdness that can happen when a 1.62-ounce golf ball is sitting on a bed of pine needles.

Nobody questioned Mickelson about his decision. Golf, after all, is a game of honor.

Mickelson won the event over Jimenez by two shots. He earned $300,000 with the win and became the fourth player, after Raymond Floyd, Craig Stadler and Fred Funk, to win on the regular Tour and the Champions Tour in the same year.

If the tournament’s rules officials didn’t agree with Mickelson — if they thought he was getting it wrong — it would have been their obligation to give him a one-shot penalty for causing his ball to move, even though it was inadvertent. But they didn’t think that, so Mickelson played the shot from its final resting place. He had par there. The rest is history, of a modest and golfy kind.