When a tournament is on the line, these players are more clutch than others 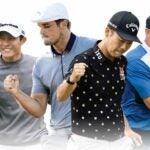 From left: Collin Morikawa, Bryson DeChambeau, Kevin Na and Brooks Koepka were clutch performers of note in the past year.

Bryson DeChambeau went to bed on Saturday night of the 2020 U.S. Open in second place, two strokes off the lead held by Matthew Wolff. Within striking distance were Louis Oosthuizen, Hideki Matsuyama, Harris English, Xander Schauffele and Rory McIlroy. DeChambeau, as we now know, left his competition in the dust on Sunday, racing to a six-shot victory. His sizzling play under pressure was what most of us would call a “clutch” performance, a gold standard of athletic achievement. But what, exactly, does it mean to be clutch? How do we quantify it?

Across years and events on the PGA Tour, which player has “upped his game” the most in consequential fourth rounds? To answer this, I needed to establish two metrics: one for measuring the importance of the situation (i.e., the significance of the final round), the other for gauging the quality of the performance.

I measure importance, also called “high-leverage” situations, as those where a player has a 10 percent or greater chance of winning going into the final round. This win probability is a function of the number of strokes separating the leader and others — how “bunched” the leaderboard is — and the overall quality of players at the top of the leaderboard. In short, win probability measures whether a player has a realistic chance of coming out on top. Heading into Sunday’s play at Winged Foot, DeChambeau had a 21 percent win probability, which definitely qualifies as a high-leverage round.

Whether a player wins or not is one way to measure performance. But that metric can also be misleading, as a player could have a great final round and still lose to an even better score. Instead, I compute a player’s Strokes Gained in the Clutch (SG-C). I do it by taking a player’s average strokes gained in high-leverage fourth rounds and subtracting his average strokes gained in all other “low-leverage” fourth rounds. The larger the SG-C, the more a player ups his game when it matters the most.

With an eye toward recent history, I looked at fourth rounds on the PGA Tour from 2017 through the 2021 Sony Open and ranked players (with at least five high-leverage final rounds) by their SG-C. High on the list are Brooks Koepka, Collin Morikawa and Kevin Na, clutch winners from the 2020 and 2021 seasons.

Who topped the roster? Bryson DeChambeau (see the chart above). He played an amazing 2.2 strokes better in high-leverage final rounds compared to his low-leverage final rounds. That last round of the U.S. Open? His final-round 67 beat the field by a whopping 7.9 strokes.

I told Bryson about his prominence in this new SG-C metric and asked him to share his secret. “Growing up,” he said, “my dad told me to always give it my absolute best, especially when your back is against the wall. When I get into those pressure situations, it’s like flight-or-fight mode. I have a survivalist mentality that unlocks the problem-solving part of my brain.”

Problem-solving, focus and drive — three traits that will help you in your own crucial golfing situations.